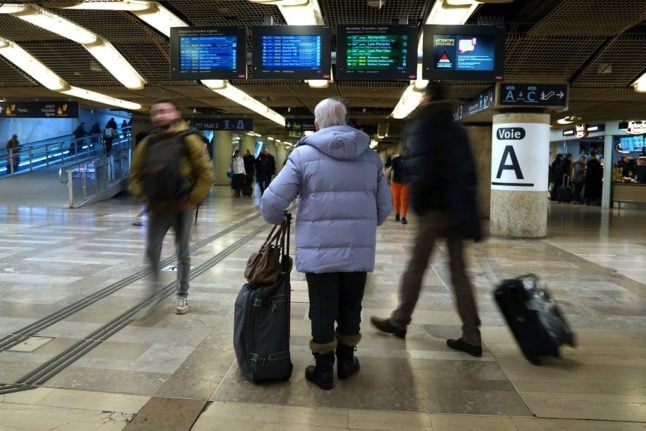 Extended families in France will be able to reunite for Christmas, the French government has promised. Photo: AFP

France has planned to end its lockdown on December 15th, which means non-essential travel will again be allowed from within the EU, the UK and Schengen area.

“In principle you can move around freely as of the 15th,” Transport Minister Jean-Baptiste Djebbari confirmed to French media on Tuesday.

This depends on France managing to keep Covid-19 numbers below 5,000 new cases per day, a threshold set by President Emmanuel Macron when he outlined the government's three-stage plan to ease lockdown.

CALENDAR: The next key dates in France's plan to end lockdown

If all goes according to plan, inhabitants in France will be free to move around nationally or go abroad – if the rules in the destination country allows for tourism – and tourists will be allowed back into France, along with second-home owners who were shut out by the lockdown.

READ ALSO: Your questions answered about international travel to and from France

A night time curfew will replace lockdown on December 15th, which will mean everyone in France must stay at home between 9pm and 7am.

Last time France installed a curfew in parts of the country, a train or plane ticket sufficed as proof that an outing during curfew hours was valid. The government has not yet specified whether travel will be a valid reason for breaking the curfew rules, but they will likely provide further details as the date approaches.

The curfew will, however, be lifted on December 24th and December 31st.

Travellers from abroad should also check travel rules in their own countries regarding France. For example the UK is still advising against all non-essential travel abroad which can impact travel insurance policies.

Many countries also have rules in place regarding arrivals from France such as quarantine or compulsory testing.

Face masks remain compulsory on planes, flights and ferries as well as inside all airport, train stations and other stations in France, as well as on the street in most of the larger towns and cities.

Here's a look at what travel services will be running this Christmas and what the risks are when booking.

The transport minister said French rail company SNCF would run on a normal service as of December 15th and reminded the public that train tickets were fully reimbursable.

SNCF has changed its cancellation and exchange policy and, until January 4th, tickets can be cancelled or exchanged until the very last moment on regular TGV high speed trains, TGV InOui trains, Intercités non-high speed trains and regional TER trains.

Ouigo low-cost train tickets are also reimbursable if they are cancelled at least 90 minutes before departure.

Several airlines reduced their services after the second lockdown entered into effect, including Air France, but transport minister Djebbari now announced that, as of December 15th, “Air France will triple its offers”.

Some airline companies will probably be seizing on the Christmas holidays and relaxed travel rules to boost their offers, but check your airline's website for last minute changes before leaving. Most airlines offer flexibility for bookings due to the health situation.

Eurostar has been running reduced services since the pandemic and has relaxed its cancellation policies.

If a train gets cancelled, travellers will be informed approximately seven days before departure, according to the company. For up-to-date information go to the Eurostar's travel information website (here).

Thalys – which runs trains to Belgium and the Netherlands – also reduced its schedule after the lockdown entered into effect and has not yet announced whether it will increase the number of trains for the Christmas holidays. For realtime updates on all lines, click here.

Thalys operates with different cancellation and exchange policies depending on the type of ticket and where the ticket was purchased. For full details go to their cancellation policy website, link here.

Renfe-SNCF trains between Spain and France has been running throughout the lockdown. The train line has a special website for Christmas travel between December 23rd and 27th with full details on trains and services, click here.

Thello train lines connecting Marseille and Milan are currently running with two trains in both direction every day and has not yet announced any changes for the Christmas holiday period. Refunds must be collected through this form. Trains between Paris and Venice are cancelled for the time being.

Trains between Switzerland and France have been running  since the lockdown entered into effect, although the company asked travellers to keep an eye on their website for schedule updates (link here).

All tickets are fully refundable free of charge until January 4th 2021 included.

Brittany Ferries has reduced its activity level and the company has suspended several services until March 2021. Some ferries will commence in December. For an updated timetables click here.

Tickets will be exchangeable free of charge, until October 2021, according to the company's website.

P&O ferries currently run 23 crossings between Dover in the UK and Calais in France per day. Passengers may amend their ticket free of charge, although not cancel them.

DFDS is currently sailing on a normal schedule. For updated travel information on sailings between the UK and France, click here.

You may still drive into France from another EU country, however anyone entering French territory must comply with the curfew rules and other rules outlined above.