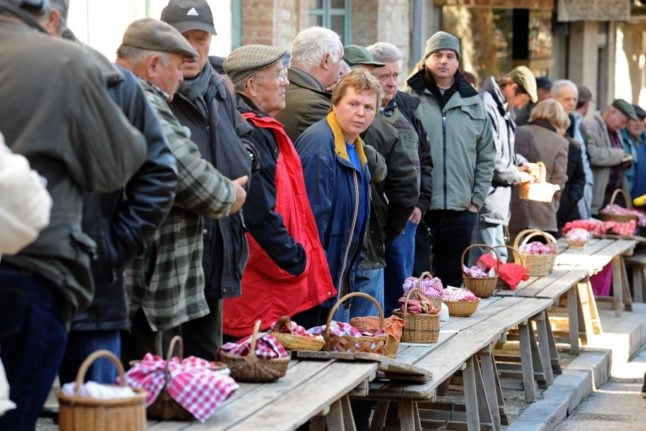 Truffle sellers line up in the famous market in Lalbenque. AFP

If you are looking for a slice of genuine south western life in rural France – call it French-style Americana – then the truffle market in village of Lalbenque in the Lot département has it all.

It has the wily peasants with business sense who don’t want others to know how well they are doing – gullible tourists, plenty of dirty tricks and of course it's all linked to food.

While much of the truffle industry is located in Provence, the market at Lalbenque , which takes place every Tuesday between from December 1st until March is one of the most well-known.

In the Lot, truffles are called “black diamonds” and it’s at this time of year that they are the most valuable and sought-after. And yet unlike real diamonds there is nothing physically attractive about the truffles, which resemble shrivelled walnuts.

But some years prices can reach more than €800 a kilo – not bad for what is basically a fungus found on the roots of mainly oak trees.

There is a small airport near Lalbenque and it's said that the late French President Georges Pompidou ordered it to be built so he could visit his country home there and fly fresh truffles up to the Elysée Palace. The market itself is a very serious affair and run by its own union.

There are close to 200 truffle growers in the Lot and each Tuesday morning before the market, union inspectors will check each basket of truffles a seller brings to ensure that they are the real deal – in other words, locally grown gems.

Occasionally in the past growers have been known to replace them with imported Chinese ones which cost about a tenth the price. Experts say they can tell the difference between a local truffle and an Asian one just by the smell.

There were deep concerns that the market would be closed down this year because of the Covid pandemic but the local Prefect weighed in saying truffles were on the list of essential food products and the market would open as normal.

But its not quite business as usual this year. The market usually attracts hundreds of tourists fascinated by this quintessential element of French rural life.

The truffle owners are perched along a long row of low tables with the baskets of black diamonds placed in front of them. First a man scrutinises his watch and then blows a whistle at 2.30pm precisely and that signals the beginning of trade.

A frenzy of activity occurs as restaurant owners, cheese shops, butchers as well as middle men traders haggle with the sellers often in hushed tones and a hand covering part of their mouth (though masks this year should make that a lot easier).

READ MORE: What you need to know about France's truffle hunting season Few like to say how much they paid – and deals are reached within a few minutes – it’s all cash in hand, thousands of euros changing hands. What I found amusing is that once a deal is done sellers and buyers move away from the market to somewhere discreet as the cash is handed over – away from curious or envious eyes.

It has shades of the famous films “Jean de Florette” and “Manon des Sources”.

Curiously the tax man won’t see any of this either – its all cash in hand and local police or gendarmes are always on hand to keep an eye on proceedings.

I once bumped into a one of most prestigious local chefs Alexis Pelissou – very dandyish in his trilby hat and long coat – followed by a camera crew from the French-German TV channel Arte. He also had his own groupies  (all women) at his side as he paraded up and down the market looking to buy several kilos of 'diamonds' for a new dish in his restaurant.

Now that’s the kind of job and way of living I could adapt to.

The market itself is over within 20 minutes and just like the Chicago Mercantile Exchange, the Truffle Union will announce to the assembled journalists, the going rate for this week. The head of the local truffle union Alain Ambialet told me truffles are best when they are firm and must never be overcooked. He says they are best in omelettes.

Well I tried them in the most expensive omelette I’ve ever had in one of the local restaurants and was unconvinced by the flavour.

But I said that was just unlucky – when I feel flush or am trying to impress someone for a dinner date I go shopping at the Victor Hugo market in the centre of Toulouse – it’s one of the most well known food markets in southern France and one of the most expensive.

Once around Christmas I saw truffle shavings wedged into brie cheese. It looked amazing and it was something like €140 a kilo, and I fell it for it. It was probably one of biggest culinary disappointments I’ve experienced – so let’s just say truffles must be an acquired taste.

Some of the more canny truffle growers have made lucrative spin-offs from their business. Coach loads of day trippers will pay to see a pig or dog on a leash as its owner encourages them to scramble for truffles in the woods.

It could be a safari, dozens of cameras and mobile phones taking snaps of what seems to be a lonely farmer searching for a truffle with his or her livestock – a picture from another age. Truffle farmers have been known to steal from each other

Neither pigs or dogs actually like truffles but they are trained early on that if they sniff one out under the soil – they will get a sugary treat in return.

I once went out with old peasant woman called Madame Delon who was going to receive a coach load of tourists in the afternoon.

She planted a bunch of truffles next to the tree just under the surface a few minutes before the buses arrived – her pet pig Kikki ‘found’ them instantly to everyone’s delight and amazement.

It turned out there was little in it for Kikki. Madame Delon told me her pig would end the year in a Toulouse cassoulet replaced by a younger one.

But if the farmers love the tourists, they are more wary of each other.

Truffle farmers have been known to steal from each other rather than look for their own in the woods.

Gendarmes check on suspicious behaviour on private land and one gendarme once told me thefts usually occur when it's misty, which makes sense, and more surprisingly when a funeral is taking place.

At one point it seemed truffles were going to go out of fashion, but in recent years there has been a surge in production as farmers diversify their crops.

If you are tempted you can go on a course as there are plenty of experts down here who will train your dogs (or pig) to sniff them out.

Chris Bockman is based in Toulouse and is the author of “Are you the foie gras correspondent? Another slow news day in south west France.”