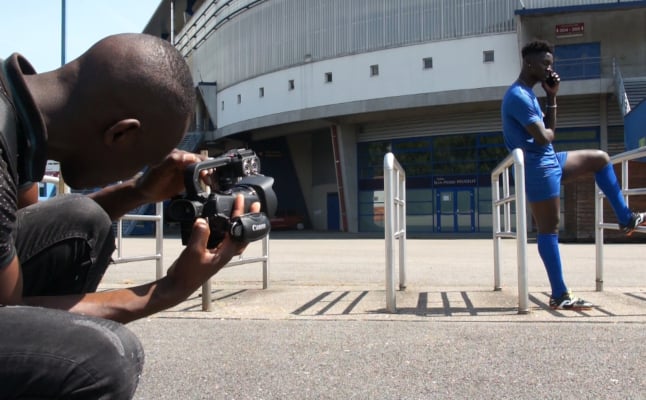 The boys were able to develop their own parts in the movie. Photo: Fabien Guillermont

This article is by Léa Marchal and is part of Changing the Narrative. Articles in this series are written by student or early career journalists who took part in The Local's training course on solutions-focused migration reporting. Find out more about the project here.

In the music academy of Montbéliard, on Saturday afternoon, Joel and Mohamed are playing the rhythm on the drums, Silvestre is recording while Williams is trying to add his vocals on the music.

Williams has written a song. And, together with the other boys, he is trying to find the best rhythm to record the better version of it. Joel and Mohamed are not missing an opportunity to try new things with their instrument. The team needs the music for the film they are making with Fabien Guillermont, film director, for the purpose of the workshop they have been doing together since July 2020.

Joel, Mohamed, Silvestre and Williams have been living in France for more or less a year. They are unaccompanied minors who have been sent to the département of Doubs on the Swiss border and are now under the responsibility of the children protection centre Grange-la-Dame in Montbéliard.

As the number of unaccompanied minors has grown over the last years, stereotypes about them have also flourished.

Their presence in bigger cities like Paris – where many live in precarious situations with no proper housing – has led to tensions between minors and the authorities, who sometimes deny their age.

How the project was born

Back in Montbéliard, the film idea came from the association Centre d'Image which raises awareness about visual arts among the youth. Sacha Marjanovic, coordinator at Centre d'Image, initiated the project in 2019.

“There were two calls for projects from a local association called Passeurs d'Images, and another one from the local authority, called Les Couleurs de l'Agglo. I submitted the idea of a movie workshop meant for unaccompanied minors and they accepted it,” he says.

Sacha then contacted both the centre Grange-la-Dame to look for participants for the project, and Fabien Guillermont, a documentary and film maker from Besançon, who immediately felt enthusiastic about the idea. At Grande-la-Dame, the educators proposed the project to the young boys. Many of them applied but only eight of them got the chance to pursue the adventure with Fabien. From July 2020 on, they started meeting, brainstorming, writing, filming, playing and editing a movie. Five of them are still actively participating in the project today.

“Little by little, some have left because they found an apprenticeship, a contract or because their school is far away,” explains the director of Grange-la-Dame, Sophie Beauté.

The first idea was to hold a 30-hour workshop about visual arts and to create a movie of any sort. The team quickly decided to produce a fictional movie about the boys' lives. Similarly to what he has done in the past, Fabien had the idea to produce a documentary about this adventure at the same time.

Its title is already set: Petits Princes. “It is obviously a reference to Le Petit Prince by St Exupéry, because the idea of the movie is: me meeting them,” says Fabien.

“The author is one of the characters and meets other characters, who will let him discover their world. The fictional characters allow us to enter their world while protecting them. We mix fiction and reality in order to protect them from authorities, when they turn 18.”

This is how Williams became a young rapper. And he takes his character very seriously. When repeating the song he has written, Williams feels totally at ease with his role, transformed by the music and the lyrics.

“During the first recordings, I was very anxious, but it disappeared little by little. Now I'm fine,” he explains.

“We had to write the whole movie. So we were sitting at a table, discussing, exchanging and we created the whole story. Each of us has created his own character,” explains Mohamed, who is playing the role of Rasta, a young boy who came all the way from Africa to France in order to find a girl he had first met in Africa.

“As far as I'm concerned, I wanted to play in the movie, so I wrote my scene together with Fabien. We edited it all together, but basically everyone wrote their scene,” he says.

For Silvestre, the role of a businessman was created based on a person he knew back in his home country.

According to Fabien, these fictional characters help them escape from the sometimes difficult reality they are facing.

“In the book The Little Prince, they draw a box to put a sheep inside. Here we create a movie to put their dreams inside of it, so that they don't lose them. Somehow they can live the life they have dreamed of, or that they had imagined, because they all experience disillusion when arriving here.” Joel – who plays a football player converted into a manager because of an injury that put a stop to his football career – says the workshops help him feel good.

“I feel liberated after the workshops. We unblock a lot of energy here, we express things about ourselves. It reveals deep things from our lives actually, from which we found inspiration for the movie. So I now feel free to talk about certain things, to have interviews like this one.”

Joel is studying electricity in the neighbouring city and wishes to continue next year to take his diploma. He has the best grades in the whole class and is about to become class delegate.

All four boys would be keen to do a similar project. Mohamed has no doubt about it, it is just a matter of time for him. “For now, I am busy with school, but during the holidays, if there is another similar activity, I can apply again. I hope so actually.”

As far as Joel is concerned, he is involved in two other similar projects. One is a dance performance, involving both unaccompanied minors and other young people from the region. This project will be related to their movie, as one of the scenes will star the dancers.

While Williams and Joel express themselves quite easily, Mohamed and Silvestre keep quiet. But all of them went quite far from this activity. Mohamed would now like to take piano classes with the music academy. As for Silvestre, he recently bought himself a camera, micro and tripod and makes small videos that he posts on social media.

All of them say they love the experience of filming and playing, but they don't see it as a professional possibility. They are all attending vocational classes in the region and say they are happy with them.

Sophie Beauté underlines that all the unaccompanied minors she is in charge of manage to either graduate, find an apprenticeship or pursue their studies.

“They are over-motivated. Some of them have crossed the world, they arrive in France, they want to learn everything. I almost never have absenteeism issues with these youngsters.

“It was the only obstacle for this project, some of the boys were not able to come to the workshops because they needed to look for a apprenticeship in order to graduate.”

The whole team was supposed to go to Annecy to present the movie at the Festival des Solidarités, which was cancelled due to the Covid-19 crisis.

Sacha Marjanovic has already contacted other festivals such as ParleMonde and Diversité in 2021 to include the fictional movie in their programmes.

Mohamed chuckles when asked if he will stand on the scene to introduce the movie. “The idea of speaking in public makes me a bit anxious, but once I am there, and I start speaking, it goes fine.” The ambitions of the boys and the film director went beyond the initial frame of 30 hours of workshop. Fabien Guillermont admits that they might have spent 100 hours on it now.

“I would have never imagined learning so much about them, and that we would go to the festival to present the movie, that is just amazing,” he says.

Although they are all happy to pursue the project, it shows that such a project needs time and resources, which associations don't always have.

Among the 40 unaccompanied minors present in the centre Grande-la-Dame, many of them were not able to join the workshop because of the few places available. Some of them couldn't apply due to strict school or apprenticeship obligations. While this project offered an opportunity to five of them, rolling it out to other regions, centres and people relies on resources as was the case here.

Sophie Beauté, Sacha Marjanovic and Fabien Guillermont are overwhelmingly satisfied with the outcome of the initiative. This explains why they would spend their Saturday afternoon attending and supporting the group in their musical session. But at the end of the day, it mostly relies on the opportunity given by public funds, and on the will and passion of a handful of local actors and volunteers to push these projects forward.

Léa Marchal is a French journalist writing for Cafébabel. Read the article in French here. 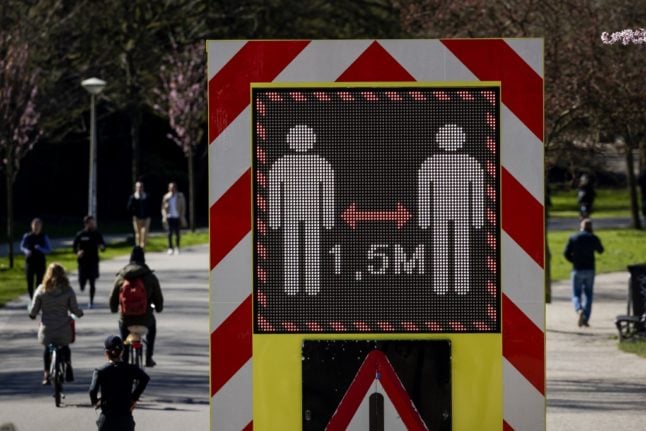 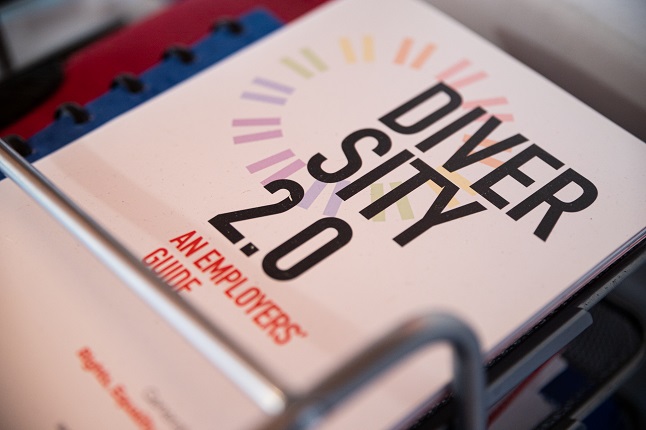 CHANGING THE NARRATIVE
‘We help prepare migrants for the job market – and prepare Greek employers for diversity’
Url copied to clipboard!