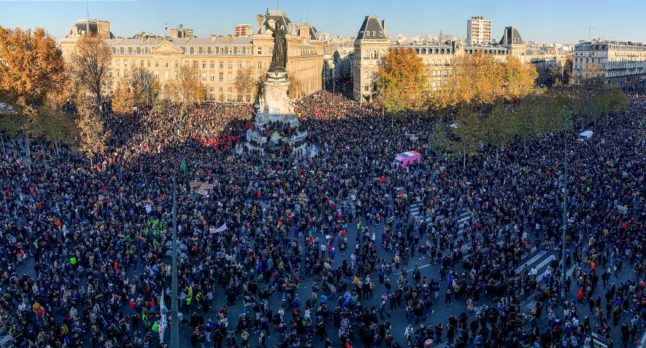 Place de la République in Paris on Saturday as tens of thousands of protesters took to the streets. Photo: AFP

French President Emmanuel Macron has today summoned ministers and parliamentary leaders to an emergency summit to produce “suggestions to re-establish confidence” between the public and the police.

This comes after a huge a turnout at protests over the weekend calling for the end of the new security law that restricts the publication of images of the police.

Lots of protesters at #Republique in Paris to protest ?‍♂️ violence and the #PPLSecuriteGlobale security law that will ban publishing images of?‍♂️ if there is manifest intent to harm. I’ll be tweeting sporadically but phone reception awful. Thread. pic.twitter.com/pA505YLltf

Many people on the demonstrations referred to the shocking video circulating last week of police beating a black music producer – four officers have now been charged.

The issue around policing and violence in France is not a new one – it was very much part of the conversation during the 'yellow vest' protests in 2019 – but for French-speakers interested in the history of the issue, this documentary comes highly recommended.

There’s been a couple of bits of Brexit news that will impact the lives of British people in France. The first is that – after several years of contradictory advice – all British people living in France will need to exchange their driving licence for a French one.

The second is the publication of the government decree that gives full detail of the minimum income requirements to secure residency after Brexit. Here’s the decree and here’s our guide to what income and other financial resources are needed.

For more info on residency, healthcare, driving and travel after January 1st – head to our Preparing for Brexit section.

What changes in France in December?

There are some big changes coming up for everyone in December though, with changes to lockdown rules as well as changes to utility bills and health insurance.

In medical news, France has published its strategy for the rollout of the Covid-19 vaccine, which divides the population into five priority groups according to who gets the vaccine first.

The issue of whether the vaccine should be made compulsory is a controversial one in France, with some pointing to polls like that conducted for the Journal du Dimanche this weekend which said that only 41 percent of French people intend to be vaccinated as an argument for making the rollout obligatory.

However Macron has stated that he will not be taking this step.

Our French phrase of the day is a beloved playground insult that is now being hurled at the French interior minister – here’s why.

Starting a Monday by explaining why protesters in Paris this weekend carried placards comparing the interior minister to a 'poo sausage' is one of the many reasons I enjoy working at @TheLocalFrance. ? ? ??https://t.co/pS4i80hXnz

And The Local’s sites across Europe have been running a training project for 100 young journalists entitled Changing the Narrative – looking at the way the media reports issues of migration. Here is our first piece from the project – an interview with a group of teenage boys who arrived in France as unaccompanied minors and who are now making a film about their experiences.