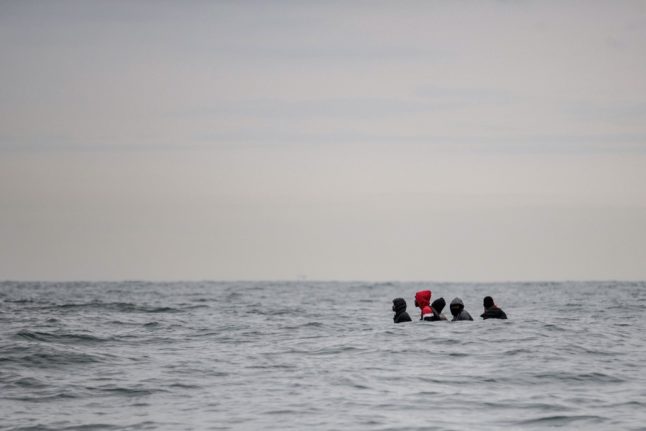 Migrants sit onboard a boat in the English Channel off the coast of northern France, as they attempt to cross the maritime borders between France and the United Kingdom on August 27, 2020: AFP

A growing number of migrants have tried to reach Britain across the perilous and busy shipping lane in recent months, with four deaths recorded in 2019 and seven so far this year.

Just this weekend, French patrol boats rescued 64 migrants, including a pregnant woman and children apparently suffering from hypothermia, attempting to cross over to Britain.

The new deal will see French patrols doubled from December 1, with drones and radar used to detect those attempting to cross, Britain's Home Secretary Priti Patel said on Saturday.

Welcoming the deal, Patel said it would help the two countries with their “shared mission to make channel crossings completely unviable”.

As part of the deal, Britain “has pledged to make an additional financial investment of 31.4 million euros to support France's major efforts against illegal crossings,” the French interior ministry said in a statement issued on Sunday.

The ministry also said it would review results over the next six months to “assess the effectiveness and impact of these additional measures”.

The issue has been a source of tension, with Britain accusing France of not doing enough to stop the crossings.

In late October, four people died and three were reported missing, devastating an Iranian-Kurdish family in the deadliest single incident for migrants attempting to cross the Channel.

In September, French authorities said they had intercepted more than 1,300 people trying to reach Britain, including a handful who had attempted to swim the 30-odd kilometres (18 miles) across the Channel.

Around 6,200 attempted the crossing between January 1 and the end of August, with inflatable boats, paddleboards, kayaks or even lifejackets to keep them afloat. Migrants travel by inflatable boat as they reach the shore near Deal on the south east coast of England on September 14, 2020, after crossing the Straits of Dover from France. BEN STANSALL / AFP

On Saturday forty-five people, “including a pregnant woman and children” were rescued after their improvised boat found itself “in trouble” near the northern French port of Dunkirk, French authorities said.

Several “appeared to be in a state of hypothermia” after being brought aboard a patrol ship, the French prefecture in charge of the Channel and North Sea said in a statement.

First responders and border police took charge of the migrants, who were “all safe and sound” when they were put ashore in Calais in the early evening, it added.

Then early on Sunday a French customs patrol boat rescued a group of 19 migrants some 18 kilometres (11 miles) south of Boulogne-sur-Mer. They included at least two children, who also “seemed to be in a state of hypothermia,” Sunday's statement said. They were handed over to police, it added.

Calm weather this weekend prompted fears among French sea rescuers that larger numbers than usual would attempt the crossing to Britain, a source close to emergency services told AFP.

With busy traffic and powerful winds and currents, the Channel crossing can prove extremely dangerous for small boats despite the apparent short distance between Calais and British port Dover.

Northern France has long been a magnet for people seeking to smuggle themselves to Britain in small boats or in one of the thousands of trucks and cars that cross over daily on ferries and trains.

READ ALSO: 'The death route': How migrants make the perilous Channel crossing from France to Britain