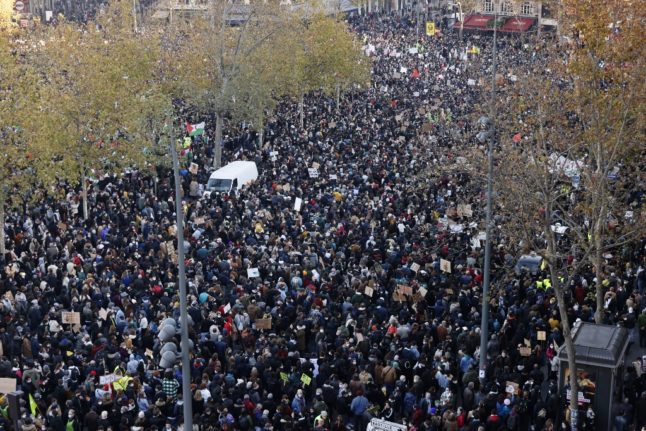 People gather on the Place de La Republique square in central Paris on November 28, 2020 for a demonstration against a new French law on global security. THOMAS COEX / AFP
The demonstrations took place nationwide while in Paris an estimated 46,000 protesters, according to the French interior ministry, marched from the central Place de la République to Bastille despite the coronavirus pandemic.
Organisers said some 200,000 people took to the streets.
Protesters were calling for Article 24, one of the most controversial elements of the new law, to be withdrawn.
Article 24 would criminalise the publication of images of on-duty police officers with the intent of harming their “physical or psychological integrity”. It was passed by the National Assembly last week – although it is awaiting Senate approval – provoking rallies and protests across France.
EXPLAINED: The new French law that restricts photos and videos of police officers While most of the march took place amid peaceful scenes a number of protesters targeted riot police with projectiles, who responded with tear gas.
Several cars and bins were burned along the route by apparent black bloc members who had joined the demonstration.

Clashes erupted as the protest ended in Place de la Bastille where youths threw projectiles in the direct of riot police who responded with tear gas and dispersal grenades. “Police everywhere, justice nowhere” and “police state” and “smile while you are beaten” were among the slogans brandished by protesters.

The Paris authorities had demanded that organisers limit the rally to a single location, but on Friday evening officials authorised a march from Place de la République to the nearby Place de la Bastille. Anna, 75, who came to France from Argentina 40 years ago, was protesting in Paris. Clad in a red jacket and blue mask, told The Local, “I'm here because I’m against the security law. I was a political refugee and I feel like the (French) government is moving in an authoritarian direction. Police should protect the people not repress them.”

Lots of protesters at #Republique in Paris to protest ?‍♂️ violence and the #PPLSecuriteGlobale security law that will ban publishing images of?‍♂️ if there is manifest intent to harm. I’ll be tweeting sporadically but phone reception awful. Thread. pic.twitter.com/pA505YLltf

In Paris, chants of Darmanin démission (Darmanin resign) could be heard, referring to the unpopular Minister of Interior Gérald Darmanin, who has vocally backed the security the law.

“It’s Macron’s responsibility,” said Pierre, 68, a supporter of the far-left party candidate Jean-Luc Mélenchon. “Macron has only made things worse. He’s the worst President we have had since (Charles) de Gaulle,” he told The Local.

Protesters hold up their phones at Place de la Bastille in Paris. https://t.co/yQvjmBLDa9 Demonstrators rally near the Place de la Republique in Paris on November 28, 2020. GEOFFROY VAN DER HASSELT / AFP
Charlotte and Serge Bensimon, a couple out walking in the centre near République, didn't know about the protest, but told The Local they wouldn't have participated in it anyway.
“It’s a difficult topic,” Charlotte said, who moved to France from Sweden 33 years ago. She and her husband had seen the footage of Michel Zecler, the music producer who was beaten up by French police last Saturday, but Charlotte said it was important to remember that not all police were bad.
“It’s not that I don’t think it’s bad, it’s just that I don’t know enough about it,” she said. From the sideline, Charlotte and Serge could hear the protesters chanting “everyone hates the police.”
“France is not doing well,” Serge said. Demonstrators show their cameras in Marseille, southern France, on November 28th, during a protest against the security law. Photo: AFP
“We have felt for a long time to have been the victim of institutionalised racism from the police,” said Mohamed Magassa 35, who works in a reception centre for minors.
“But now we feel that this week all of France has woken up,” he said.
“The fundamental and basic liberties of our democracy are being attacked — freedom of expression and information,” added Sophie Misiraca, 46, a lawyer.
Video footage showing police officers beating and racially abusing music producer Michel Zecler shocked the country when it emerged this week.
President Emmanuel Macron called the incident an “unacceptable attack” on Friday and asked the government to come up with proposals to “fight against discrimination”.
The president spoke of images “which shame us”, according to a statement released on social media.
An investigation has been opened against the four police involved but commentators say that the images – first published by the Loopsider news site – may never have been made public if the contentious Article 24 of the security legislation was made law.

Under the article, offenders could be sentenced to up to a year in jail, and fined €45,000 for sharing images of police officers.
The controversy over the law and police violence is developing into another crisis for the government as Macron confronts the pandemic, its economic fallout and a host of problems on the international stage.
In a sign that the government could be preparing to backtrack, Prime Minister Jean Castex announced Friday that he would appoint a commission to redraft Article 24.
But he was forced into a U-turn even on this proposal after parliament speaker Richard Ferrand – a close Macron ally – accused the premier of trying to usurp the role of parliament.

“France the country of police rights”. Place de la Republique fills up for the march in protest against the French government's new security law and against police violence…much of which has been caught on camera recently… pic.twitter.com/icPji0L9bk

The government says the provision is intended to protect officers from online abuse and has been intensely lobbied for by police representatives.
But media unions say it could give police a green light to prevent journalists – and social media users – from documenting abuses such as those against Zecler.
For critics, it is further evidence the slide to the right of Macron, who came to power in 2017 as a centrist promising liberal reform of France.
“The police violence has left Emmanuel Macron facing a political crisis,” said the Le Monde daily.
The issue has also pressured Macron's high-flying right-wing Interior Minister Gerald Darmanin – who was promoted to the job this summer despite being targeted by a rape probe – with Le Monde saying tensions were growing between him and the Elysée presidential palace.