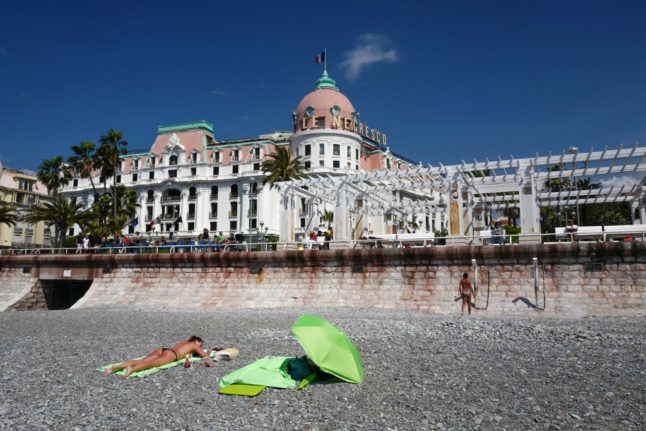 Friendly and sun-drenched Nice scored highly on a survey of its foreign residents. Photo: AFP

The report from international network Inter Nations ranks cities according to their experiences for international residents – including issues like quality of life, job opportunities and the cost of living.

In the global survey Nice came 16th while Paris trailed in 61st place.

The Spanish city of Valencia came out top, followed by Alicante and Lisbon.

Nice scored particularly well in the Quality of Life category, coming third overall, beaten only by Vienna and Valencia, with many people commenting on its laid-back lifestyle.

It also scored highly on the Weather and Climate section, with not a single survey respondent saying they were unhappy with the weather – perhaps unsurprisingly for a city that is sunny for 63 percent of its daylight hours. Paris, on the other hand, scored poorly on the financial section with many saying they are unhappy with the famously high living costs in the capital – which recently topped a global poll of the most expensive places to live.

Only 19 percent of people said they found it easy to find housing and 70 percent described the city as 'unaffordable'.

READ ALSO Locals reveal how to live cheaply in Paris

On the positive side, it scored well for job opportunities – around a third of the French economy is concentrated on Paris and many sectors such as media, international organisations and tech are heavily focused on the capital.

But it seems that Parisians' infamously grumpy reputation also counted against the city, with 40 percent of people saying the locals are not friendly and 56 percent saying they found it hard to make friends.

On Brazilian resident passed a brutal judgement, telling the survey: “In general, Parisians are angry, complain too much, and smile too little.”

The Inter Nations survey asked 15,000 people representing 173 nationalities about their experiences living in 161 countries. They were asked to rank 25 aspects of their new lives abroad on a scale of one to seven, from social lives to career opportunities and housing costs.

No other French cities made it into the top 66.

The top 10 best cities for foreigners are