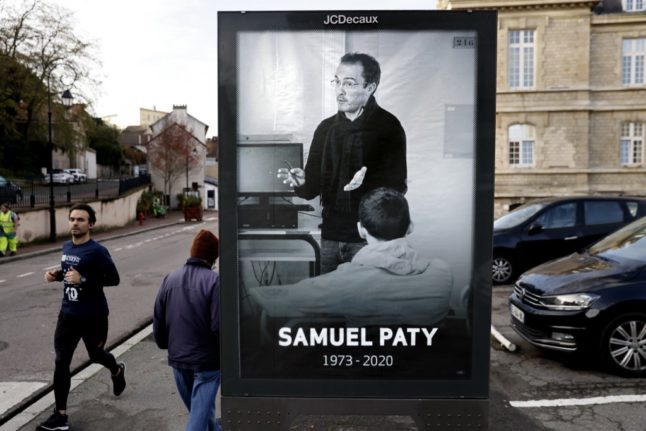 A memorial to Samuel Paty in Conflans-Saint-Honorine, the town where he taught. Photo: AFP

Three other pupils were charged earlier this month with complicity over the beheading last month of Paty, who had shown his students cartoons of the Prophet Mohammed as part of a lesson on free speech.

Three of the four students charged Thursday were suspected of identifying Paty to his killer, 18-year-old Abdullakh Anzorov, who then tracked him down and beheaded him in a street near his school.

The three, who are between 13 and 14 years old, are being charged with “complicity in a terrorist murder,” the source said.

The fourth is the daughter of a man who launched a virulent online campaign against Paty denouncing the teacher's use of the cartoons published by satirical weekly Charlie Hebdo.

She has been charged with “slanderous denunciation” of Paty after relating her version of events in the classroom, though she did not actually attend his civics lesson.

Paty's murder sparked a torrent of outrage that prompted President Emmanuel Macron to crack down on Islamist extremism and violence in a country reeling from a wave of jihadist attacks since 2015 that have killed more than 250 people.