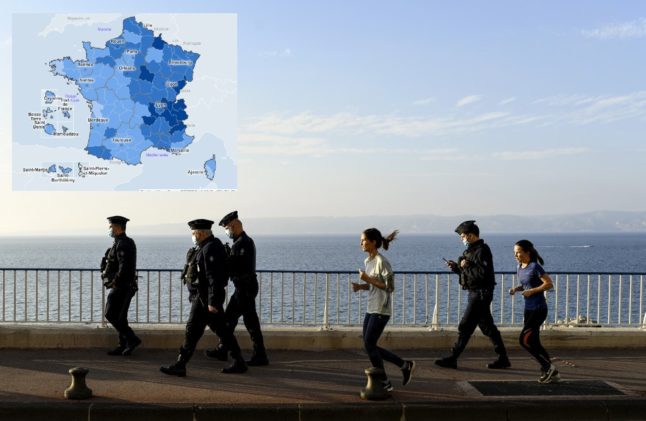 To monitor the state of the Covid-19 epidemic in the country, French health authorities use several key indicators that they break down on a local level.

One of these is the incidence rate or infection rate, which refers to the number of positive cases per 100,000 inhabitants over the course of seven days.

The map below shows how the incidence rate varied across France according to the most recent data, published by France's public health agency Santé Publique France for the week of November 16th until November 22nd.

Départements coloured the lightest shade of blue reported a low incidence rate between 10 and 20 – there doesn't appear to be any on this map.

Areas coloured dark blue on the map had an incidence rate above 250, which in the period preceding the lockdown meant an area would tip into maximum alert level with increased restrictions including a curfew.

As the map shows, areas that continue to struggle with high levels of spread are those around Lyon (although Lyon itself reported somewhat lower levels of spread) and those départements on the Swiss border.

The Haute-Alpes département bordering Italy also has a stubbornly high infection rate (306.9 per 100,000).

The high infection rates in these areas is part of the reason why President Emmanuel Macron has decided not to allow ski resorts to open this Christmas.

Départements on the Belgian border (Ardennes) and the Yonne département, southwest of Paris, also still have high infection rates – both around 274 per 100,000.

Paris itself reported much lower levels of Covid-19 spread (97.1 per 100,000) than it had in the preceding weeks, indicating that lockdown and the preceding curfew has had a positive effect and dramatically reduced transmission levels in Paris.

The western département of Finistere in Brittany had the country's lowest incidence rate (35.2 per 100,000).

READ ALSO: Why France's new Covid-19 figures give reasons to be optimistic

However, test rates have plunged in November too, and doctors warn that these numbers must be interpreted with some caution as they cannot be certain of the reason why fewer people get tested. It could reflect a general decrease in need to get tested, but it could also – and that's more worrying – be that people are less prone to get tested under lockdown.

What is the situation in hospitals?

However there were big regional differences in the level of pressure on hospitals.  The map below shows how many patients were currently hospitalised in different French regions on November 25th. The same was the case for intensive care wards, which counted 4,148 total patients in France as of November 25th. This number has stabilised since the lockdown, although some regions still struggle to cope with high pressure (especially Paris and Lyon areas).

The map below shows how many patients were admitted to hospital intensive care wards in different French regions on November 25th.