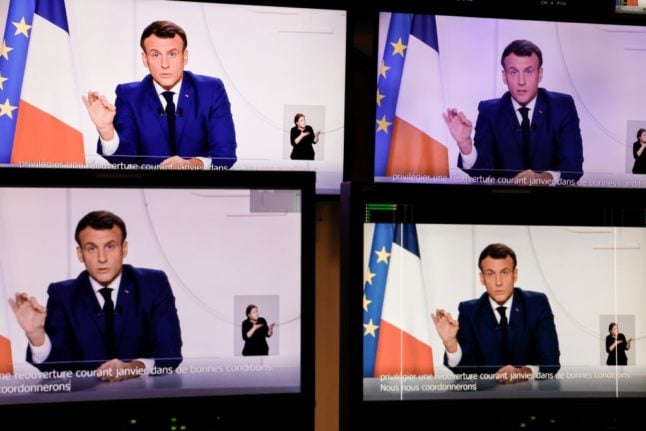 President Emmanuel Macron did a TV appearance last night and laid out a roadmap for ending France's second lockdown.

His speech was watched by 29 million people, not far off half the population of France (although it must be said that we're low on alternative entertainment at present).

His plan is a three-step process, with each gradual loosening of restrictions depending on case numbers staying low, ending (hopefully) with the lifting of the lockdown and making travel and visiting family and friends possible again.

Here are the key points;

In other news, French Prime Minister Jean Castex has said he will ask the country’s constitutional court to examine the highly controversial security bill that could ban the publication of images of police officers.

The issue has been thrown into sharp focus by shocking scenes of violence as police dismantled a migrant camp in central Paris on Monday.

The below cartoon from Libération's Willem sums it up, showing the interior minister watching footage of the police at the migrant camp and saying 'Shocking! I can't believe my eyes, inappropriate behaviour from police, not blurred. Fortunately there are people there to film it'.

France says it will apply its ‘digital tax’ to online giants like Facebook and Amazon on their 2020 earnings.

This tax – which essentially seeks to get the 'GAFA' – Google, Amazon, Facebook and Apple – to pay tax in the countries where they earn their revenues, rather than picking a low-tax country to declare all their European earnings in, has been a massive bone of contention between France and the USA, with the Americans threatening tariffs on French goods in return.

Our word of the day is one for the risk-taker in your life.

The team behind the restoration of Paris' fire-damaged Notre-Dame cathedral have shared this amazing time-lapse video of their work over the last 18 months.

#NotreDame update!
Jun-Nov 2020: 5 months to take down the scaffolding that had melted during the 2019 fire.
40,000 pieces / 200 tons of metal taken down from 40mt high while protecting the fragile stone around and under.

And we’re looking ahead – all the way to 2024 when hopefully the pandemic will be a distant memory and the Olympics comes to Paris. Here’s a roundup of where the events will be held and which one will be under the Eiffel Tower.