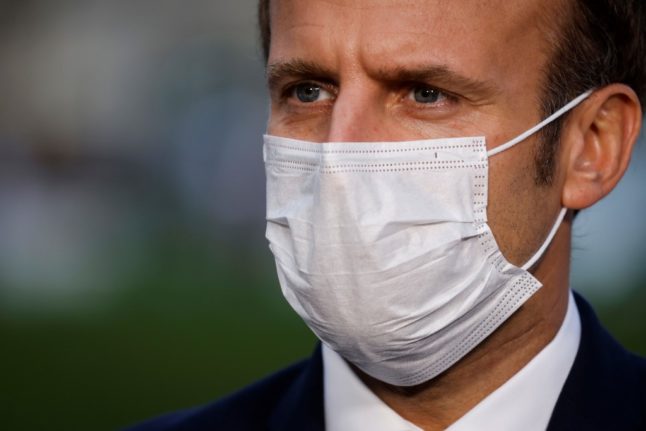 Set to appear live on TV at 8pm, the president is set to announce the steps ahead for France from December 1st, when the current lockdown period ends.

The government's Defence Council is meeting on Tuesday to thrash out the final details, but here's a look at what we can expect.

Will Macron ease the lockdown?

French media have reported that Macron will shy away from using the word déconfinement (lifting lockdown) and instead use phrases like un aménagement des règles en vigueur (adjustment of the rules in place) or un assouplissement (a relaxation).

Over the last few days the government has been laying the groundwork for what is likely to come and the general theme seems to be 'don't get your hopes up'.

Last week the government spokesman Gabriel Attal bluntly told reporters: “We're not at all near ending the lockdown, we're still far from it even.”

Instead what is expected is a lifting of some restrictions, while others remain in place for at least the first half of December.

READ ALSO France lockdown: What's next and when do we find out more?

What about shops?
Macron is expected to say that non-essential shops can reopen, in a bid to boost economic activity by allowing for more Christmas shopping. Book shops, clothing shops and others will likely be in among the first places to reopen, although we don't yet know exactly what date this will be.

In his speech last week, Prime Minister Jean Castex said that while he hoped that shops could reopen on December 1st. Some French media have later reported that shops could be set to reopen the coming weekend, on November 27th or 28th.

Those concerned will likely have to comply with a series health rules that media reports suggest could be even stricter than those announced this summer, such as requiring 8 square metres per customer rather than 4 square metres.

Online stores such as Amazon in France agreed to postpone Black Friday sales – scheduled for November 27th – until shops reopen. Amazon says it will be running Black Friday deals on December 4th, so they at least seem confident that shops will be open by then.

What about places of worship?

This is another pressing question, as Catholic groups have lobbied the government to allow for religious ceremonies in the holiday season.

Media reports said the government was preparing to reopen these places rather quickly with rules that will limit the number of worshippers allowed on a fixed space, similar to that of shops.

France Info said the government will use the same limit that is in place for funerals, so 30 participants max, while BFMTV said there will have to be 1 square metre per worshipper. As always, we won't know for sure until Macron speaks himself.

What about restaurants and bars?

Based on the media reports and previous statements from government officials, bars and restaurants will likely stay closed for the time being, with some reports suggesting the government has ruled out reopening these places before mid January.

The same goes for gyms.

There have been reports that hairdressers are preparing to reopen too in early December – and some are already taking advance bookings – with similar health rules to shops (so 8 square metres per customer).

This has been met with outrage by the sector, which says it will be difficult to follow in practice.

Some media reports have concluded it is unlikely that the government would reopen cinemas, concert halls and the like, because respecting a limit similar to the 30 participants maximum-rule, would be difficult in these places.

However BFMTV said the government is planning to allow religious services again a couple of weeks after shops in order to see what the impact of loosening rules has on Covid-19 numbers.

What about ski resorts?

The government has been seriously weighing the possibility of reopening ski holiday resorts for Christmas. Prime Minister Jean Castex, after he met with representatives of the sector on Monday, promised a decision would be taken “in the coming ten days”.

Will we be able to throw away the attestation?

Anyone who leaves the home in France at the moment must always be equipped with a signed attestation permission slip stating that their outing is essential.

All reports so far have rejected the idea that the government will scrap the attestation, meaning people will still only be able to leave their home for 'essential' reasons such as shopping, exercise of taking children to school.

However some say the government might loosen up the 1km exercise rule – stating that trips out for exercise must last a maximum of one hour and stay within 1km of the home – to allow for more mobility.

And what about Christmas?

Many people are on tenterhooks, waiting to know if they can make plans to visit family over the Christmas period.

Several government ministers have warned that Christmas will not be 'as normal' this year, but there is expected to be some relaxation in the rules, which could be announced tonight or in a later briefing in mid-December.

What is the current Covid-19 situation?

France will soon be one month into its second nationwide lockdown, which although it is less rigid than the first one this spring appears to have had the desired effect on Covid-19 numbers, which over the past weeks have stabilised.

Macron previously said he wanted cases to be down at 5,000 a day before easing lockdown.

From a peak of 50,000 new cases a day, health authorities reported 4,452 new positives on Monday, a much lower figure than previous weeks that was below the president's limit of 5,000.

However, daily numbers often fluctuate and the government has reiterated that it wants be cautious not to prompt a flare-up in cases, which could cause a third wave of the virus just over Christmas.

But the numbers are looking much better than they have over the past weeks, with the test positivity rate now down at 13.3 percent and the R at 0.65 (meaning every new Covid case will contaminate less than one new person on average).

Hospitals have seen pressure ease over the last two weeks, with the number of patients dropping and intensive care patient numbers beginning to flatten out.

France on Monday reported 4,454 intensive care patients, with 243 new patients admitted that day. While that was less than previous days, the pressure on intensive care units in France was still alarmingly high, and the saturation rate on Monday was at 87.8 percent, according to government data.