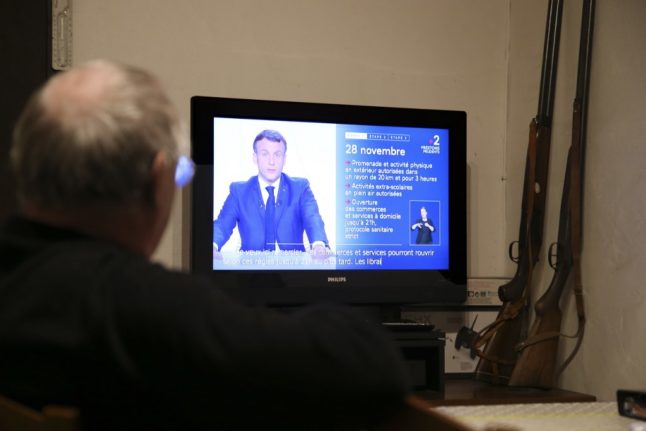 Macron announced that some measures will be lifted from Saturday, November 28th, while others will be lifted on December 15th – if certain health conditions are met – and others from January 20th.

He said: “We have passed the peak of the second wave. Our efforts, your efforts, have paid off.

“We have slowed down the circulation of the virus. . . Today we have reached 5,000 cases per day.

“We still have several weeks in front of us to reach the goals that I have set,” Macron said, referring to decreasing hospital patient numbers further.

“To do that, we must continue for several weeks to avoid activities in enclosed places that accelerate the spread of the virus and limit gatherings as much as possible.

“Tonight I will fix a calendar.” However the lockdown will continue, people must continue to work from home if they can and trips outside the home can only be made for essential reasons. An attestation will still be needed for every trip outside.

The next stage is from December 15th, and this will only happen if the number of new cases keeps below 5,000. Macron also said the aim was keep the number of Covid-19 patients in intensive care units below 3,000. If these targets are met, on December 15th:

The next phase begins on January 20th, and again depends on certain health targets being met, including keeping the case numbers below 5,000 per day.

Macron said: “Around January 20th we will be able to take, if possible, decisions on opening up further.” On January 20th, if conditions are met

Macron did not mention bars at all.

As for ski holiday resorts he said: “It seems impossible to plan for them to open for the holidays but we should aim for a reopening sometime in January.”

Macron did not mention international travel, but in France's second lockdown the border rules for those entering the country from within the EU, the UK or the Schengen area are the same as the lockdown rules.

International travel – like travel within France – has only been permitted during lockdown for essential reasons, but once this is lifted on December 15th, there remain no border restrictions for travellers from within Europe. The Local has asked the Interior Ministry to confirm this.

Travel from outside Europe, however, is still limited to essential trips only and reopening EU borders will be done on a coordinated level within the European community.

All EU countries have the right to make their own border rules, but France has stated throughout that it will follow EU guidelines on when to reopen the borders to non-European travellers.

Many other countries, including the UK, have in place rules on testing or quarantines for arrivals from France.

For the latest on travel in and out of France – click here.

The announcement comes against the background of some positive health news, which appears to show that the country's second lockdown of 2020 is having the desired effect.

From a peak of 50,000 new cases a day, health authorities reported 4,452 new positives on Monday. The test positivity rate has fallen from 20 percent to 13.3 percent and the R at 0.65 (meaning every new Covid case will infect less than one new person on average).

Hospitals have seen pressure ease over the last two weeks, with the number of patients dropping and intensive care patient numbers beginning to flatten out.

However, the pressure on intensive care units is still alarmingly high, Covid-19 occupancy on Monday was at 87.8 percent, according to government data, and daily deaths still number in the hundreds.

Macron also spoke about testing and vaccines, saying the country hopes to begin the first vaccines in late December or early January.

He also said he would not make the vaccine compulsory, as had been discussed in some quarters because of France's historically high level of vaccine-scepticism.

He added: “At the beginning of January, no test should take more than 24 hours between the test request and its result.”