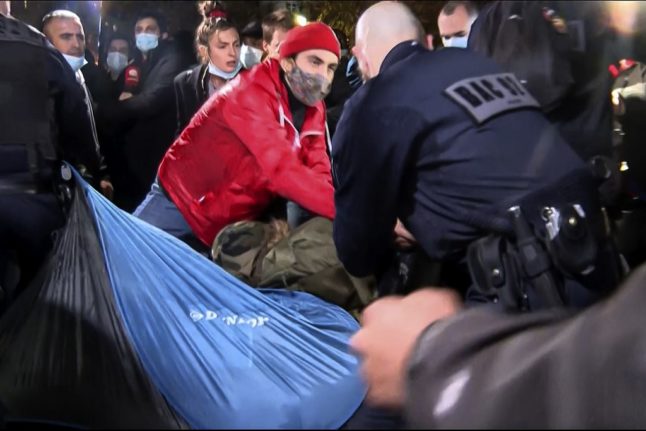 Police evacuate a migrant camp in the heart of Paris on November 23rd. Photo: AFP

French Interior Minister Gérald Darmanin has said some of the images showing the dismantling of a makeshift migrant camp set up as part of a protest in Place de la Republique on Monday evening were “shocking”.

Darmanin ordered police chiefs to present an immediate report on the clearance of the camp, which he said was “illegal”.

After receiving the report the minister said he had asked the internal police inspectorate (IGPN) to investigate what he described as “several unacceptable” events. He asked the IGPN, known a “the police of the police” to submit their conclusions within 48 hours.

Protesters, mostly volunteer charity workers, had helped set up around 500 blue tents at the Place de la République in the heart of the French capital late Monday, which were quickly occupied by migrants, the majority from Afghanistan.

The migrants had been removed from other migrant camps on the edge of the Paris but offered no alternative accommodation. The charity Medecins du Monde decided to organise a protest in Place de la Republique to demand lodging for those on the streets.

Around an hour later police arrived to dismantle the camp, picking up tents, sometimes with people still inside sparking protests from migrants and protesters.

The clearing descended into a general melee between protesters and police and led to accusations that officers had resorted to violence.

“They are too violent,” sobbed Shahbuddin, a 34-year-old Afghan as he put a grey beanie back on his head after being forced out of his tent. “We just want a roof.”

Police used tear gas to disperse the rest of the camp, driving the migrants out into the streets of central Paris.

Videos taken by journalists on the scene showed clashes between police and protesters as well as the journalists themselves.

One police officer was seen kicking out at a man in his stomach, while another showed an officer shoving a protester to the floor with his riot shield.

Another video showed an officer violently slamming a French journalist to the ground.

France's political class reacted with a mixture shock, shame and outrage at the images.

“The state has made a lamentable show,” Ian Brossat, a Paris deputy mayor in charge of housing, told AFP.

CFDT trade union chief Laurent Berger told France 2 TV that the actions of the police were “scandalous and astounding”.

“People occupy a square peacefully with tents, simply because they have a housing problem, they are not harming anyone. And there is this intervention which is totally disproportionate,” he said.

Head of the Socialist party Olivier Faure described the images as “revolting” and unbearable”.

He said: “I was stunned by what I saw. We are country that holds itself up as the country of human rights.

French government minister Marlene Schiappa said: “Migrants are people and they need to be treated with humanity and  fraternity.”

Officers must “keep their cool above all and only use force if it is absolutely legitimate,” said the secretary general of the SCPN union.

The dismantling of the new camp came one week after migrants were evacuated from makeshift shelters in the northern suburb of Saint-Denis without being relocated.

Volunteers said the camp at Place de la République was to underline that authorities are failing to solve the underlying problem which is a lack of official lodging for migrants.

“We're here to show that we have nowhere else to go,” said Murtaza, 20, from Afghanistan before the camp was dispersed.

“We can't live like animals, we just want to claim asylum.”

Ian Brossart, a deputy of the city's mayor in charge of housing, emergency accommodation and refugee protection, slammed the “law enforcement response to a social situation”.

The clearance came just days after the French government approved late Friday an amended clause of a “global security law” proposal that would restrict the publication of photos or videos taken of police officers' faces while carrying out their duties in public spaces.

The French parliament will vote on the full security bill on Tuesday.

Media unions and Reporters Without Borders say this could give police a green light to prevent journalists from doing their work and potentially documenting abuses by security forces.

Watch this thread. These images, shot by French journalists last night, show ? kicking&beating migrants to chase them out of Paris. The first video shows a ? violently attacking journalist @RemyBuisine. Would these images exist if the #PPLSecuriteGlobale were already in place? https://t.co/UKlv6R0tnI

Amnesty International have said the law could deter regular citizens from exercising their right to protest peacefully and have detrimental impact on French democracy.

Paris is a key stop-off point on the European migrant route, with tented camps repeatedly sprouting up around the city only to be torn down by the police a few months later.

Thousands have travelled from Paris to the port of Calais and attempted to stow away on trucks heading across the Channel to England. A small number attempt the crossing by boat.