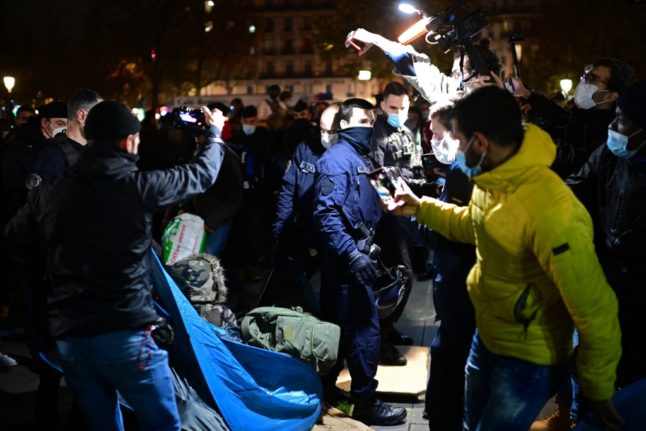 France’s interior minister has declared himself ‘shocked’ by images of brutal behaviour as police broke up an encampment of migrants in central Paris.

Thugs roughing up Afghan refugees around the Pompidou Centre in Paris last night. Watch the one in white at the end, and the way he's tripped up. Man who stands up for him gets a punch in the face from another half-pint tearaway. https://t.co/erzB6vY7gu

The video footage is shocking enough, but what is even more shocking is that this type of film could be declared illegal under a proposed new law that the minister has championed.

Reopening shops? Christmas travel? A relaxation of the 1km rule? These are just some of the options on the table for president Emmanuel Macron, who will announce the next phase of lockdown at 8pm tonight.

We will be following live here and for now we’re looking at what to expect.

Also pending is a decision on when French ski resorts can reopen – the prime minister has been meeting representatives of the ski industry.

Those who work in French ski resorts saw the 2019/20 season curtailed when the pandemic arrived in February and then the country locked down in March, and are now facing the loss of much of the 2020/21 season.

On the international stage, the proposed new US Secretary of State is causing a bit of excitement in France. The reason? He’s a fluent French speaker and former American-in-Paris.

Here he is displaying his linguistic skills.

Here's Biden's very probable Secretary of State Antony Blinken saying on French TV how important a partner the EU is to ??

Please tweet this at Brexiteers ! (if there are any left) ?? pic.twitter.com/4XABtufRvR

And we’re looking at the French concept of laïcité – frequently misunderstood and sometimes deliberately misrepresented, we examine what the French secular ideal means and, just as important, what it doesn’t mean.

Today's talking point is a little less serious – inspired by an (excellent) article in the New Yorker, our readers are debating whether it's really true that the French hate cinnamon.

We never heard this before either – do French people hate cinnamon?!
(I mean you can buy it in most French supermarkets, so that would suggest not . . .) https://t.co/ouQcZdhY60