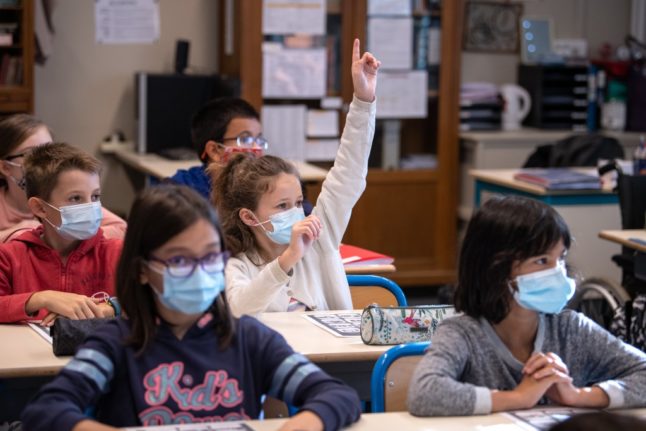 The proposal is for France's pupil ID system to extended to children who don't attend state schools. Photo: AFP

France found itself accused of behaving “as the Nazis did to Jews” after a claim swept the internet that the government was proposing to create a register of Muslim schoolchildren, and assign all Muslim children with ID numbers.

The claims seem to have begun on English-language Twitter accounts and were then repeated by Pakistan's human rights minister, who made the comparison with Jewish people forced to wear yellow stars by the Nazi regime, in a tweet that was later deleted.

The claims were then picked up by several high profile American journalists who, without apparently taking the steps to check whether they were true, also accused the French government of acting like Nazis.

The only problem – there is no such plan proposed in France.

But the widespread claims forced the French government to take to Twitter to put the record straight.

“Any so-called information pertaining to alleged intent to register children being schooled in France based on religion, belief or origin, is absolutely false,” tweeted France's Ministry for Europe and Foreign Affairs in English.

Any so-called information pertaining to alleged intent to register children being schooled in France based on religion, belief or origin, is absolutely false.

So what is happening?

READ ALSO What is in France's new law to crack down on Islamic extremism?

The law is due before the French parliament on December 9th and so far only an early draft has been published.

The law is focused on preventing radicalisation and Islamist extremism in France, it was proposed in the summer, but revised after the beheading of schoolteacher Samuel Paty by an Islamist extremist.

Among the proposals in the bill is one to give all school-age children in France an education number.

In reality most children in France already have this number, the identifiant national élève (INE), which children are assigned when they start school and which follows them throughout their educational career.

But children who are never enrolled in state schools, either because they are home-schooled or attend private school, do not get a number, and it is this the government wishes to change, to ensure that all children complete a full education.

The draft bill establishes a clear principle: all children must attend school. Home schooling will be limited to exceptional circumstances and require specific authorization based on clear and non-discriminatory rules.

Emmanuel Macron, outlining the principles of the bill, said there were concerns that some ultra-conservative Muslims were taking their children out of the French state school system.

The proposal for numbers, however, would apply to all children, whatever their religion or ethnicity.

In fact because of the French state's commitment to laïcité (secularism) it would be both illegal and impossible to assign a number only to Muslim children.

Huh?
Macron's bill deserves robust scrutiny by reporters. But on the basis of facts. This is false. There is no proposal (which would be illegal in ?? anyway) to give school ID numbers only to Muslim kids. All pupils would get one.
Misinformation about ?? is getting out of hand? https://t.co/NWX2j0Ii2i

The French state declares itself 'colour blind' and does not collect any data on the religion or ethnicity of any residents – if you have ever filled out an official form in France you will notice that the one question never asked is your religion or ethnic background, in contrast to many other countries including the UK which do collect data on the race and religion of their residents.

As well as extending the pupil ID numbers, the proposed law has stricter controls on children who do not attend schools.

In France home-schooling is possible, but quite tightly regulated,  with parents having to register with local education authorities and submit to inspections to ensure that their children are receiving a complete education.

It seems that the bill intends to tighten this process further, establishing that only in exceptional circumstances can children be educated at home, although no detail has yet been published on what these circumstances would be and how parents can be authorised to home-school.

The draft bill establishes a clear principle: all children must attend school. Home schooling will be limited to exceptional circumstances and require specific authorization based on clear and non-discriminatory rules.

The full bill will be published on December 9th when it will be debated by MPs.

The French government has released a statement saying that it has raised the matter of the Pakistan minister's tweet with the country's embassy in Paris.

The French government's statement reads: “A member of the Pakistani government spoke social media in terms that are deeply shocking and insulting to the President of the Republic and to our country.

“These hateful remarks are shameless lies, imbued with an ideology of hatred and violence. Such calumnies are unworthy at this level of responsibility. We reject them with the utmost firmness.
“We have made our condemnation known without delay, in the strongest terms, to the chargé d'affaires of Pakistan in Paris. Pakistan must rectify these statements and return to the path of dialogue based on respect.”