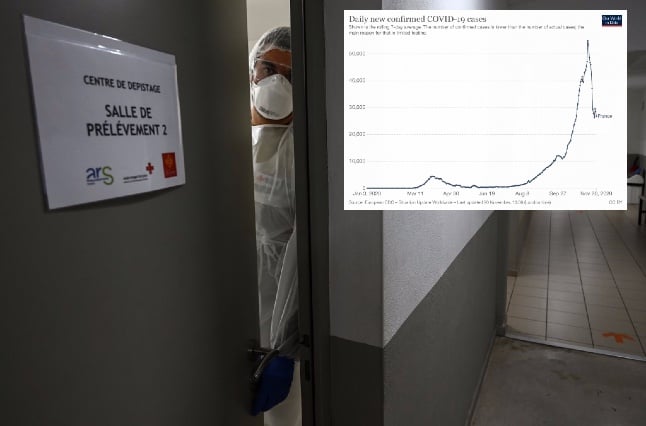 A member of the French Red Cross working at a Covid-19 testing centre. AFP

“Although indicators are still at high levels, they suggest that the peak of the second wave is behind us,” France's health agency said on Friday, November 20th.

A few days earlier France's Health Minister Olivier Véran said the country had passed the peak of the second wave.

“The virus is circulating less rapidly than previously,” Veran said.

He was referring to the fact that, for the first time in months, the country's daily Covid-19 hospital patient rates were slowing down rather than rising.

The cautious optimism is leading to hope that the government will agree to ease the lockdown but authorities are stressing to the public that they must not let their guard down.

Here's a breakdown of the latest key numbers to understand the Covid-19 situation in France as of Friday November 20th.

There are fewer cases…

Down 40 percent – In its weekly report the French pubic health agency Santé Publique France reported that the number of cases per week in the seven days up to November 15th had dropped by 40 percent.

0.65 – The famous R rate stood at 0.65 on Friday November 20th, down from 0.81 earlier in the month. The R rate refers to how many new cases each Covid positive person will infect on average. Earlier in the second wave the R rate had reached as high as 1.4.

Epidemiologists have warned against paying too much attention to the R as it fluctuates easily, especially at a low level, but the key is to keep it below 1. If the R is below 1, it means that the epidemic spread is slowing down whereas if it's above 1 the spread of the virus is growing.

By November 20th it was down again to 15 percent. That means that of all tests carried out, 15.5 percent brought back a positive result. While that is still a high number – the positivity rate was 8.6 percent in early October and 1.8 percent in early August – the rate had been rising steadily for months and the past week’s development broke with that trend. This is the number of new positive cases per 100,000 inhabitants on average in the seven days preceding that day. This was significantly less than in the week before the lockdown entered into effect. From October 26th to November 1st, the incidence rate was 486, according to Santé Publique France’s weekly report.

The level of spread varies between areas, as it did during the first wave, although the variation is less glaring now than back then as the entire country is suffering high levels of spread.

The map below shows the incidence rate on a local level as of November 12th, with dark blue indicating a rate above 250. Some regions, such as the Auvergne-Rhône-Alpes region around Lyon, were seeing rates as high as 1,000 in some places. France's hospital numbers have surpassed those at the height of the pandemic this spring, when they reached a high point of 32,131 patients in total on April 14th. That peak came nearly three weeks into the spring lockdown, which was even stricter than the one the country is under now.

4,653 – This was the total number of patients in intensive care wards across the country on November 20th, down from 4,880 on November 15th.

Authorities reported on November 20th that 311 new patients were admitted to intensive care in the previous 24 hours. Earlier in November daily admissions had reached the 500 mark.

The percentage of the total number of intensive care beds taken up by Covid-19 patients had fallen to 91.7 percent on November 20th after topping 96 percent the previous week.

Intensive care unit patient numbers are key, because when they rise it means death tolls will probably follow.

In its weekly report for November 9th to November 15th SPF said intensive care admissions had dropped by 9 percent.

A few things are important to note here.

Firstly, France has increased its intensive care unit capacity from 5,000 permanent beds in March to 5,800 beds before the second wave this autumn. Capacity is now up to 7,700 beds now as part as the government’s emergency plan to deal with the second wave.

During the first wave of the epidemic in spring, the country reached a top point of a total of 7,019 patients on April 8th.

This time, hospitals are both better prepared when it comes to material resources, but they have also improved their medical treatment of Covid-19 patients meaning fewer seriously ill patients become admitted into intensive care wards this time.

Despite all of this, one in four Covid patients who enter intensive care do not survive.

Here's a look at the total number of patients admitted to France's hospital intensive care units per week since February until November 17th. As you can see the numbers have started to fall. 436 – This was the number of hospital deaths reported in 24 hours on November 19th. On certain days during the second wave the death toll has topped 500.

But the main sign that the mortality rate was falling was given in its weekly report by SPF.

For the week November 9th to 15th the number of deaths in care homes and hospitals fell by two percent from the previous week (3,756 down from 3,817).

Deaths may remain stubbornly high over the coming days given the fact there are more than 4,500 patients still in intensive care.

Santé Publique France said the “encouraging” statistics “should not make us forget that pending the availability of treatments and vaccines, the only way to slow the pandemic and lessen its impact on the health system is still to adopt individual prevention measures, combined with collective measures.”

The health minister has cautioned that, despite these “signs of improvement”, the country needed to remain cautious to avoid provoking a backlash.
“As long as the epidemic is on this level, it can quickly go back up again,” Véran said.
MAP: How France's Covid-19 second wave exploded in just one month

It should be added that the current level of hospital patients, especially intensive care patients, is putting a strain on hospitals that is serious enough to cause several emergency transfers between regions to alleviate pressure on establishments in hotspots that are on the verge of becoming overwhelmed, just like they were during the first wave.

Hospitals have also had to postpone non-coronavirus treatments, which could have grave consequences on patients in the need of other types of medical treatments, as was the case during the first wave this spring.