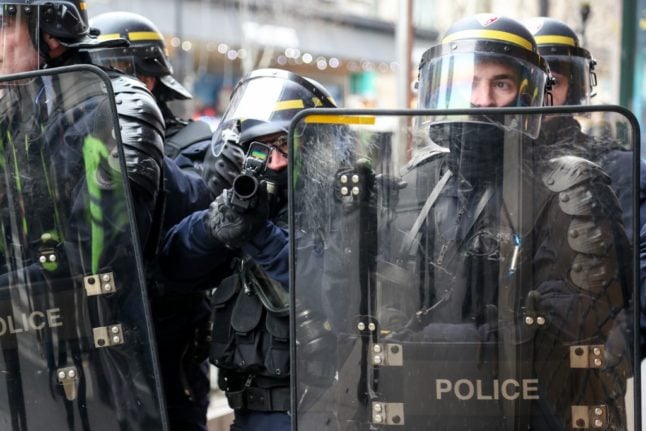 There have been widespread protests over article 24 of the new security law loi relative à la securité globale, which in its original form proposed banning the publication of any photos or videos which identified police officers, if there was “intent to harm the officer's physical or mental integrity”.

Critics – including global organisations Amnesty, Reporters Without Borders and the United Nations – protested that “intent” was vague, hard to prove and open to abuse from police and could ultimately lead to reporters being unable to do their job in covering protests and demonstrations.

Interior minister Gérald Darmanin had robustly defended the bill – and in an interview appeared to go further and suggest that reporters would need to alert police before covering demonstrations.

Darmanin has also taken heat for suggesting that journalists would need to blur officers faces before publishing images, a notion that is not mentioned anywhere in the text proposal. Several police union representatives have even criticised the law for not including blurring and therefore not going far enough.

After a meeting with Prime Minister Jean Castex the government announced that article 24 would be 'clarified'.

A press release from the prime minister's office said he wished to “preserve the balance of the text” and “remove any ambiguity on the intention to guarantee respect for public freedoms, including freedom of the press and freedom of expression, while better protecting those, policemen and gendarmes, who ensure the protection of the population”.

The bill, which also covers other aspects of security and law enforcement, is still being debated in the French Parliament Assemblée Nationale, and will then need to go before the Senate for further debate before it can be adopted into law.

As well as widespread street protests in France, the bill also attracted international criticism for appearing the curb the freedom of the press and freedom of expression.

In the tweet below Roland Lescure, one of the French MPs who represent French citizens living abroad, responds to criticism of the bill.

And I hope @jameskmcauley that you are following the debates around this draft legislation closely. It is in no way intended to impede press freedom. And we are amending it today to make sure it is cristal clear. Regards https://t.co/NG0oh5OYSP

The government had argued that the restrictions on images of police officers were necessary to protect officers and their families from being targeted in online campaigns.

But others have pointed to the number of cases of police brutality that have been uncovered thanks to video footage – much of it amateur footage shot by passers-by on phones and published on social media before being reported by the press.