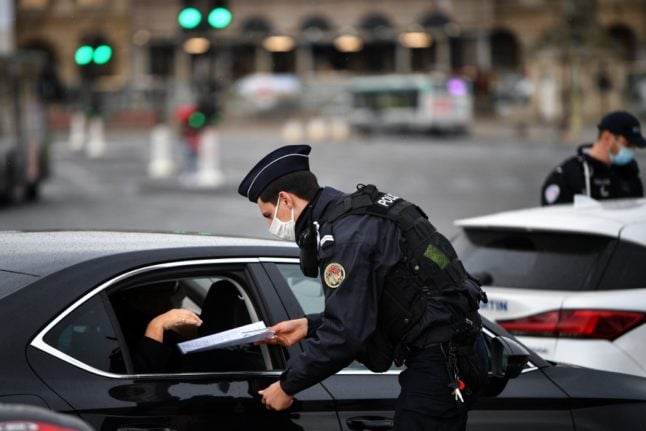 French police enforcing the lockdown rules that require permission forms for all trips outside the home. Photo: AFP

Where are we now?

France is currently under a nationwide lockdown. This is not as strict as the lockdown in the spring – schools remain open, more people are going to work and shops can offer 'click and collect' services – but there are still plenty of restrictions.

This lockdown came in on October 30th and runs until December 1st. The government conducted a review half-way through and decided that, although there are some early positive signs in the latest health data, the restrictions should stay in place until at least December 1st. There will be a review this week when the French government will decide which – if any – restrictions it will lift on December 1st.

They will also lay out some guidelines for the crucial matter of Christmas and whether people in France will be permitted to visit families over the festive period.

President Emmanuel Macron will be making another televised appearance on Tuesday at 8pm.

What we expect from that?

Over the last few days the government has been laying the groundwork for what is likely to come and the general theme seems to be 'don't get your hopes up'.

In his speech last week, Prime Minister Jean Castex said that while he hoped that shops could reopen on December 1st, bars, restaurants and gyms would likely have to stay shut.

In answer to a question, Castex also said people likely would continue to need attestations to leave their homes after December 1st.

Since then there have been various leaks to media and off-the-record sources saying that bars and cafés are unlikely to open before January, or possibly even later.

French media are also reporting that Macron will shy away from using the word déconfinement (lifting lockdown) and instead use phrases like un aménagement des règles en vigueur (adjustment of the rules in place) or un assouplissement (a relaxation).

Last week the government spokesman Gabriel Attal bluntly told reporters: “We're not at all near ending the lockdown, we're still far from it even.”

So if we accept that at least some restrictions will still be in place by December 25th, what does that mean for Christmas?

Under the current regulations the things that most people want to do – travel to visit their families and sit down for dinner/drinks with a group of family and/or friends – are not allowed.

But here's what politicians have said about Christmas.

Prime Minister Jean Castex said: “Our objective is to allow a new relaxation over the Christmas period . . . so that the French can spend the holiday season with their families.”

However he went on to warn that this will not be a normal Christmas, saying: “It is not reasonable to hope for big parties and gatherings of several dozen people.”

No numbers have so far been suggested as to what would constitute a 'large' gathering, but one unnamed minister was quoted in the French press saying: “One thing is sure: we will not tell the French to eat individual turkey parts in a tray, talking to their family by video conference.”

The question of transport services over the Christmas period is a key one – usually the weeks before and after Christmas are among the busiest of the year for national rail company SNCF, with 1.7 million people travelling by train over the holiday period in a normal year.

Last year Christmas transport was badly disrupted by strike action, with only around half of normal services running, but at present SNCF is running only around 30 percent of its usual long-distance services, since the lockdown forbids most types of long distance travel.

The question of whether SNCF will be allowed to increase services is therefore a big issue, with transport minister Jean-Baptiste Djebbari saying he had asked the rail operator to be 'ready' to increase services, but adding that this would only be possible if the health situation allows.

For foreign residents in France hoping to travel to see family in their home countries, there has so far been no discussion of lifting restrictions on international travel.

Anyone wanting to travel to another country would also have to contend with restrictions in place there – for example the quarantine in the UK still in place for travellers from France.

How is the health situation?

Of course, both lockdown and lifting lockdown – or confinement and déconfinement as the French language more elegantly has it – depend on the latest Covid-19 situation.

And here there is some good news, as lockdown appears to be having the desired effect – enough for the health minister to declare that France has “passed the peak” of the second wave.

However although the trends are encouraging, the situation is still very serious, with France averaging around 400 deaths a day and intensive care units around the country running at 94 percent of their capacity.