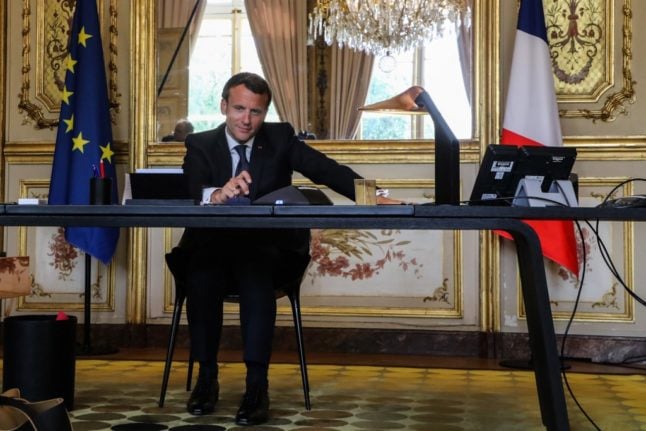 French President Emmanuel Macron is due to make another TV announcement. Photo: AFP

French president Emmanuel Macron is lined for another TV announcement next week, but the advance messaging from the government seems to have the theme of ‘don’t get your hopes up’ – here’s what we can expect from phase 2 of lockdown.

There is a handy little French word for this concept too.

Macron is also expected to give some indication on what we will be allowed to do over the Christmas holidays, again there are likely to be rules in place, but one minister was quoted in the French media as saying: “One thing is for sure, we won’t be telling the French to eat individual turkey parts in a tray while talking to their family on a video call.”

And here’s a look at the latest Covid-19 data that will be the basis for any decisions made.

On the subject of lockdown – the rules have been clarified to police after people in one area were fined for driving five minutes to their nearest town – which happened to be in another département – to go shopping.

France’s interior minister has been forced to row back somewhat on the controversial security bill, bringing in an amendment to ‘clarify’ the rights to freedom of expression.

It was just one part of the bill that prompted protests earlier in the week, but the bill itself covers quite a wide range of issues from CCTV cameras to drone footage.

There are further protests planned this weekend over certain aspects of the bill.

Christmas trees are now on sale, after a government decree established them as essential, but retailers are in talks to postpone Black Friday until shops are permitted to reopen.

For British readers, the French government has published the long-awaited decree setting out the rights and responsibilities of British people in France after Brexit – here is what it says.

Viewing
And if you're looking for something to watch, we highly recommend this film about the 'Paris woman' and why she is a myth.

We unpack the myth of the Parisian woman who's often portrayed as being svelte, seductive and also white. @AnnetteF24 meets @LostNCheeseland author of #TheNewParisienne which profiles a group of women who challenge the cliche. ?? Watch full show here ? https://t.co/tCssTNLuKy pic.twitter.com/rxXlMAUuZY