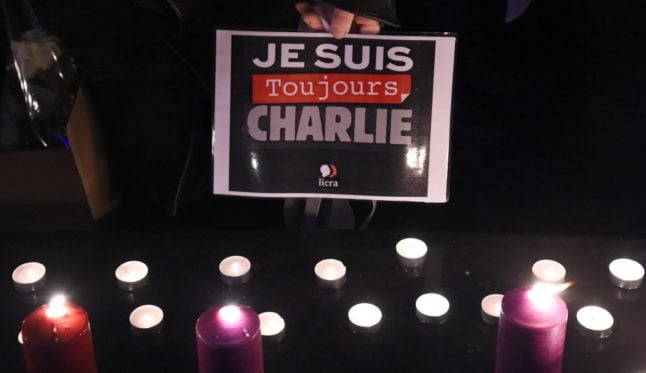 The world reacted with solidarity to the 2015 terror attacks, so what's changed? Photo: AFP

After the massacre at Charlie Hebdo magazine five years ago, scores of thousands of people all over the democratic world displayed signs and badges declaring: “Je suis Charlie” – I am Charlie.

One month after the French history teacher, Samuel Paty, was beheaded outside his school, President Emmanuel Macron complains that some English-language media are now saying, in effect: “No, we are NOT France.”

Newspapers “from countries that share our values” have suggested, he says, that “the heart of the problem” is French racism and Islamophobia. By doing so, he complains, they are “legitimising” Islamist violence.

Does Macron have a point? Yes, he does. Some, not all, of the US reporting and commentary on the Paty and Nice murders has been wilfully misleading.

Should France, in its anger and grief, be spared all criticism? No, of course not. Is there racism and Islamophobia in France? Yes – just as there is in Britain and the United States. Does that explain why France has suffered 30 serious Islamist attacks in eight years? No, it does not. Macron in his 'gilded' office in the Elysée – it is pretty bling, to be fair. Photo: AFP

The French media has compounded and further confused the situation by saying that Macron is under attack in “les media Anglo-saxons”, as if all American and British reporting and commentary on last month’s murders had been unanimous. No, it has not.

Another false narrative is being pushed on social media – that a furious Macron is calling US and British editors, Trump-like, and demanding that all critical articles should be withdrawn. No, he isn’t.

The news site Politico.eu withdrew an article by a French academic last month. The Financial Times suppressed an op-ed. In both cases, the Elysée Palace had pointed out factual inaccuracies in the pieces – which claimed that Macron was attacking “islam” or “conservative islam” , not Islamism or jihadism. The FT gave Macron a right of reply.

In neither case, according to my information, did Macron or the Elysée ask for the articles to be withdrawn. Many other readers had pointed out their multiple inaccuracies.

READ ALSO Why does France want an 'envoy' to explain its position to the Muslim world?

This false narrative of a “Trumpish” Macron trying to interfere with press freedom – while defending freedom of expression in France – was further promoted this week by a very odd article in the New York Times by its media writer Ben Smith.

I will quote the first few lines.

“The president has some bones to pick with the American media: about our “bias,” our obsession with racism, our views on terrorism, our reluctance to express solidarity, even for a moment, with his embattled republic.

“So President Emmanuel Macron of France called me on Thursday afternoon from his gilded office in the Élysée Palace to drive home a complaint. He argued that the Anglo-American press, as it’s often referred to in his country, has blamed France instead of those who committed a spate of murderous terrorist attacks…”

Firstly, the delayed identification of the “president” as Macron deliberately conflated the French president with Trump. Secondly, the whole passage turned out to be grossly misleading.

We are left with the impression that the French President had, unexpectedly, called the media writer of the New York Times from his “gilded office” in Paris to complain about the American press. That is certainly what all the French media reported.

Fake news. As Mr Smith has since admitted, the interview had been arranged days before after he had spoken to the Elysée Palace. The rest of the piece is a blend of reasonable commentary and wilful snarkiness.

Macron is given space to explain his grievances but – partly though the misleading introduction – he is presented as petulant and intolerant of criticism.

How has it come to this? Why the difference in the US coverage of Islamist attacks in France in 2020 and 2015?

It was the New York Times which set the tone early on. After the Paty beheading it ran – and then withdrew – a headline which read:. “French Police Shoot and Kill Man After a Fatal Knife Attack on the Street.”

Its more considered coverage included a suggestion that the France’s response amounted to a “broad government crackdown against Muslim individuals and groups”.

Really? The government’s actions after the Paty murder were somewhat scatter-gun but scarcely a crackdown on Muslims because they were Muslims. (Some of the sillier remarks by Macron’s interior minister are another question, as I wrote earlier this week.)

Other coverage in the New York Times and Washington Post has been far more balanced but still misrepresents – in my opinion – the seriousness of the Islamist/terrorist problem in France and misunderstand what Macron proposes to do about it.

The memory of 9/11 was still alive in the US at the time of the Charlie Hebdo, Hypercacher and Bataclan attacks five years ago. It seems now to have been overlaid, post-Trump, by a tendency to view all issues as defined by race.

Yes, French Muslims are often marginalised. Yes, there is Islamophobia in France. Neither “explains” the Islamist terrorist attacks in France any more than ambient British Islamophobia explains the Manchester Arena attack. If racism is an adequate explanation, why is there no systematic, black terrorist movement in the United States? Or France or Britain for that matter?

In his speech on combatting Islamist “separatism” on October 3rd, Macron acknowledged that Muslims had too often been pushed to the edges of French society. He admitted that this created fertile soil in which anti-western, anti-democratic, extremist, Islamist teaching could grow.

He needs urgently to follow that up with his promised concrete proposals to help the multi-racial inner suburbs.

Meanwhile, the details of his draft law to defend the French principle of secularism (due December 9th) are already beginning to emerge.

Some US media, some Muslim leaders abroad – and the withdrawn articles in the FT and Politico – claim that Macron is trying to ‘reshape’ Islam or create a ‘French Islam’.

This is untrue. The new law is an attempt to prevent, extremist Islamist propaganda, and money, from abroad from further colonising or hjacking or distorting the beliefs of France’s 3 million or so practising Muslims.

Some of the comments and actions by Macron and his ministers in recent weeks have been clumsy. The French concept of a ‘secular state’ is hard for some non-French people to grasp.

But Macron is right to say in another interview this week with the pro-European magazine, Le Grand Continent, that this is more than just France’s battle. ‘‘The fight against terrorism and radical Islamism is a European struggle, a struggle about values,’ he said.

Yes, put that way, we ARE all French.