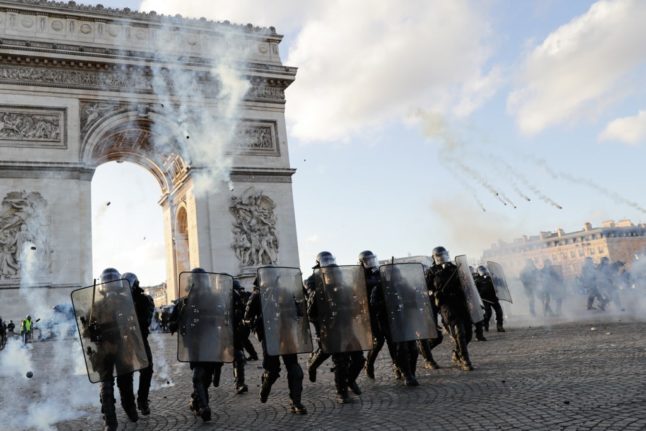 Police in front of the Arc de Triomphe monument in Paris, during a 'yellow vest' protest. Photo: AFP

The French parliament is today debating a security bill that has proved highly contentious. The new security law – among other things – could ban people from publishing photos or videos of police officers.

One of the reasons that so many people are concerned about this is the high number of cases of police brutality in France that have been revealed via amateur video footage – here’s a selection of the most high profile cases.

And sticking with politics, our columnist John Lichfield takes a long, hard look at France’s interior minister and concludes that he is becoming a danger to France’s reputation abroad and unity at home.

Some readers will remember him as the man who is apparently 'shocked' when he encounters the soy sauce and Tex Mex aisle at the supermarket.

France's interior minister says he is shocked every time he sees an ethnic food aisle in a supermarket, and now I can't stop thinking about him crying next to the soy sauce https://t.co/fCmBjnr7bU

There are still many uncertainties surrounding Christmas this year – here’s what we know so far about lockdown and travel rules – but one thing is certain; we’re allowed to buy Christmas trees and we can start on Friday.

And across France a petition calling on people to boycott Amazon this Christmas and instead support their struggling local retailers is rapidly gaining signatures.

Brilliant. @markchapman does very well with his pronunciation of the French town of #Reims here. I'd like to see him have a go at these other French towns. @MicahRichards would be on the floor with #Rouen https://t.co/yc4tbpXWy3

Inspired by the heroic efforts of this British sports presenter, we’re taking a look at the trickiest place names in France and how you really say them.

Tell us – What are your most embarrassing mistakes when learning French? Shoutout to @evanoconnell for this excellent idea.