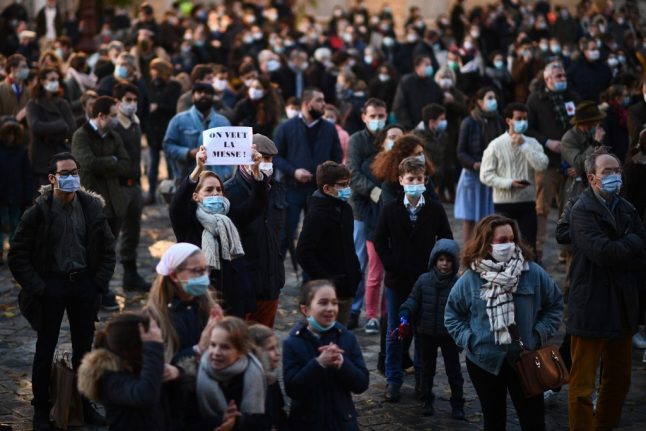 Protests demanding the resuming of Mass in Versailles, near Paris. Photo: AFP

While places of worship remain open during the second nationwide lockdown, which began on October 30th, regular prayer services are banned.

More than 300 worshippers gathered outside the cathedral in the south-western city of Bordeaux on Sunday to demand that mass be reinstated.

Some said prayers or sang hymns, despite the gathering being billed as a protest, prompting the police to call in the organisers for questioning. A protester in Strasbourg holds a sign saying 'let us pray'. Photo: AFP

On Saturday, some 250 faithful gathered outside Rennes cathedral, where they also prayed. Similar protests were also held in the northeastern city of Strasbourg and Nantes in the west.

Most of the protesters wore masks.

In Paris, however, authorities banned a gathering outside Saint-Sulpice church, citing health concerns over the spread of the coronavirus and fears that some would illegally pray on the street following a smaller prayer gathering Friday at the site.

Under France's latest measures to fight the virus, churches can celebrate funerals and weddings, with a maximum of 30 people and six people present respectively, but larger gatherings are banned. During lockdown places of worship remain open, but services are banned. Photo: AFP

France's highest administrative court, the Council of State, on Saturday rejected an appeal by Catholic groups against the ban.

“Life is more important than anything else, and life is about battling the coronavirus,” he told France Info radio on Friday.

Opponents of the ban argue that people are more at risk of contracting the virus in supermarkets, which remain open, than in a church where social distancing is enforced.