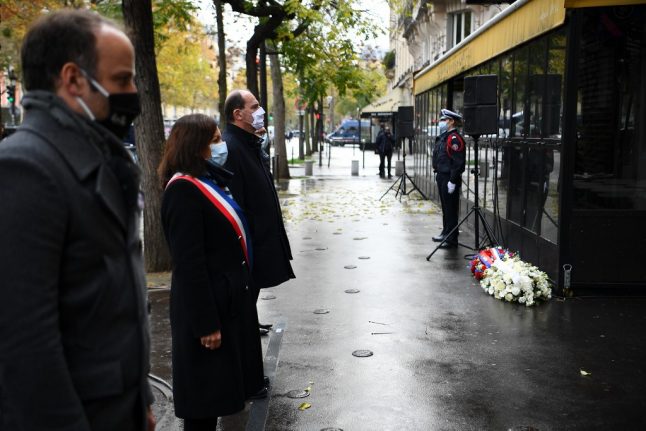 France has today been looking back five years to November 13th 2020, when a devastating series of terror attacks in Paris, including at the Bataclan concert hall, took 130 lives.

Memorials were scaled back because of the health crisis, but heartfelt.

Lockdown is continuing for at least another 15 days, France’s prime minister announced last night, while outlining the latest health data that sees a new Covid patient admitted to hospital every 30 seconds in France. One in four deaths in the country is now Covid-related.

But Castex also gave some indication on what will happen into December and over the Christmas period.

Police checks on lockdown rules are being stepped up across France, and they probably won't all be as cute as this scene below from Strasbourg.

If only all police checks in France were like this https://t.co/INsVJqxru3

There was also an announcement for French schools, some of which will be allowed to move up to half of their teaching online.

This comes just a week after most of the 2021 baccalaureate exams were scrapped.

We're not usually ones to spread tittle-tattle, but some sections of the French media are reporting that former president François Hollande has acquired himself another glamorous younger partner.

Not that I’m one to spread gossip, but Francois Hollande, 66, has reportedly replaced actress Julie with dancer Juliette, 33. When president he was famously caught on the back of motorbike visiting Julie when he was officially with Valerie, who wrote a venomous book about it all. https://t.co/qfTFZ8xe6T

Teaching English is naturally a popular job for Anglophones in France, so we’re looking at how to get onto one of the teaching programmes that gives you a working visa.

We’ve also been speaking to a real estate agent about the likely hotspots for property in France in 2021 and the rising trend of people buying rural retreats to escape lockdown.

If you’re moving to the countryside and intending to work, however, one crucial thing to know is how the local phone and internet connections work – here’s a map of all the ‘dead zones’ in France. And our French word of the Day is one for dark, dodgy or just unexplained situations.