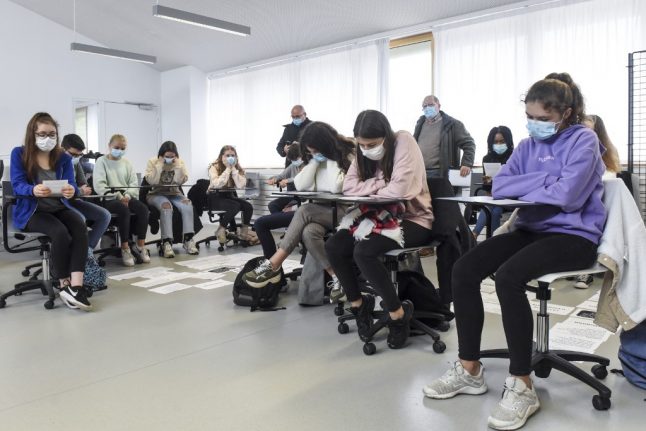 The country's education minister Jean-Michel Blanquer confirmed that the country's lycées, for pupils aged 15 to 18, can begin moving some of their teaching back online.

All teaching in France was done online when schools were closed in the spring, but they have remained open during the country's second lockdown, with health rules in place including compulsory masks.

Because of the disruption to children's education, which fell particularly hard on the most disadvantaged children, the government has been determined to keep schools open if at all possible.

However Blanquer announced a change to this, speaking at a press conference with the Prime Minister on Thursday where it was confirmed that the current lockdown will continue until at least December 1st.

He outlined proposals to allow lycées to move some of their teaching online, but said that pupils must spend at least 50 percent of their time in the classroom.

The exact composition of remote v. face-to-face teaching is up to each individual establishment, but Blanquer added that “100 percent presence is preferred”.

The remote teaching plan was only for students at lycée (high school) –  younger children in collège (secondary school), primary school and maternelle (infants) will continue with in-person classes.

Universities are already operating a mixture of in-person and online classes, with rules restricting lecture halls to 50 percent of their normal capacity.

His announcement follows on from the news that exams will be scrapped for the majority of subjects in the baccalaureate, which students take during their third year at lycée.

For most subjects, grades will be given via assessed coursework, with expanded exams only for pupils' 'speciality' subjects.

Those exams will take place as usual in March, but there will be a second date in June for any pupils who are ill or self-isolating on the March date.

These changes are temporary and only affect the 2020/21 academic year.