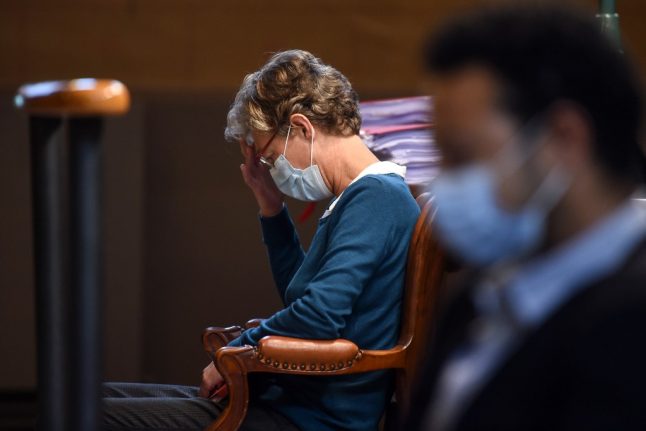 Helga Wauters, 51, was found guilty of manslaughter over the 2014 death of Briton Xynthia Hawke

Helga Wauters, 51, was found guilty of manslaughter over the 2014 death of Xynthia Hawke, who died four days after a chaotic procedure that starved her brain of oxygen, sending her into cardiac arrest.

Hawke had passed her due date when she was admitted to the maternity ward of Orthez hospital near the southwestern city of Pau on September 26, 2014.

The Somerset native, who was living in France, never saw her son who was delivered safe and sound.

The investigation showed that Wauters, who was less than two weeks into the job, inserted a ventilation tube into Hawke's food pipe instead of her windpipe before the Caesarean.

When Hawke's oxygen levels plummeted Wauters used an oxygen mask instead of a ventilator to try revive her because she did not know how to work the ventilator, witnesses said.

Wauters was not in court in Pau for the ruling. The court imposed the maximum sentence for her crime.

She admitted starting the fateful day with a mix of vodka and water, “like every day”, to stop her hands trembling.

“I recognise now that my addiction was incompatible with my job,” Wauters told the court in October, adding that “I will regret this death my entire life.”

But she denied being solely responsible for Hawke's death, arguing that other staff were also to blame and claiming that the ventilator was not working — a claim later shown to be false.

Wauters had given Hawke an epidural local anaesthetic earlier in the day.

During the birth, complications arose, requiring an emergency C-section.

When Wauters returned to the maternity ward after being called in to administer a general anaesthetic, she had alcohol on her breath, according to witnesses.

Hawke woke up during the operation and began vomiting and shouting “it hurts” before ripping out her breathing tubes.

A nurse on duty described the scene as being like a war zone.

“It was Baghdad,” she said.

The state prosecutor told the court the operation amounted to “carnage”.