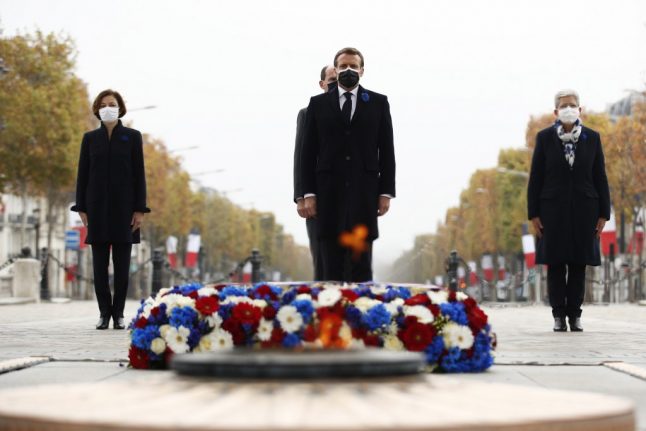 Today is a public holiday in France as the country marks Armistice Day. The ceremonies were greatly scaled down this year, for obvious reasons, but President Emmanuel Macron still laid a wreath at the Tomb of the Unknown Soldier at the Arc de Triomphe while similar wreath-laying events took place around the country.

And here is Macron sharing a brief chat with his predecessor – and former boss – François Hollande during this morning's ceremony.

Emmanuel #Macron to François #Hollande at the #ArmisticeDay commemorations at the Arc de Triomphe. “Hello Mr President. How are you? Not so difficult?” “Yes, a little bit.” #11Novembre pic.twitter.com/u74qCl5UHN

Meanwhile in Saudi Arabia, a bomb injured several people at a memorial ceremony at the non-Muslim cemetery in Jeddah attended by, among others, the French consul.

If you're watching French TV this evening you can see live coverage of the ceremony to inter the body of French writer and World War I veteran Maurice Genevoix in the Pantheon, the highest honour from the French state.

As we're in a contemplative mood we're also looking back at some of the lesser-known heroes of World War II – the French women who risked their lives to join the resistance.

As the world celebrates news of a Covid-19 vaccine, the head of the EU's health agency says it envisages the first vaccines being given in the first quarter of 2021.

However Andrea Ammon, the director of the Stockholm-based European Centre for Disease Prevention and Control, stressed that so far it is a “press release and not yet a (scientific) peer review, so we have to see what the final assessment will be” while urging people to follow their respective countries' lockdown rules in the meantime. Donald and Melania Trump with Emmanuel and Brigitte Macron in France in 2019. Photo: AFP

Macron was among several world leaders to exchange phone calls with the new US president-elect Joe Biden on Tuesday – here's what they talked about.

The French leader worked hard to try and build a relationship with Donald Trump during his presidency, but that was not enough to save France from the putative tariffs levelled by the USA on products including wine.

The French Interior Ministry has announced the creation of a new online portal for foreign students to apply for residency cards.

This follows on from the online service for British people to secure their post-Brexit residency cards, and the ministry says it is working on moving other residency processes online, removing some of the paperwork that is the bane of the lives of non-EU residents in France.

We know that lockdown is difficult for everyone and while those stuck in cramped apartments in the city may dream of open countryside, doing lockdown in rural areas can bring its own challenges too – from loneliness to loss of services. So we're asking our readers in the rural France to share with us the coping strategies they have developed. Bleuet – cornflower. The blue flower is the official flower of remembrance in France, and people wear them on their lapels on Armistice Day. There is also a bleuet appeal that raises money for veterans of war and victims of terror attacks.

Coquelicot – poppy. The poppy has no association with remembrance in France, unlike in the UK – instead it is the symbol of environmental campaigns against the over-use of pesticides.