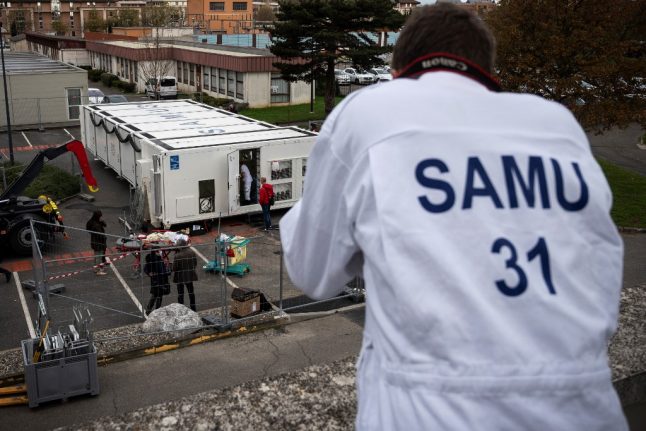 “The peak of the epidemic is coming. The second wave is still progressing,” said Jérôme Salomon, Director General of France's public health agency Santé Publique France, during a press conference on Monday evening.

That day, French health authorities reported another 551 Covid-19 deaths in the country’s hospitals, a number that has steadily increased along with hospital patient numbers over the past weeks.

France had been hoping to see decreasing Covid-19 rates this week as the country had entered its second week of nationwide lockdown over the weekend.

But epidemiologists and health authorities have warned it will take longer for the numbers to drop this time than it did during the lockdown imposed in March, because the rules are less rigid now and allow for more people to leave their homes more often.

However, Salomon said there were improvements in areas that had been subject to a nighttime curfew before the lockdown, such as Paris.

“(In these regions) the virus is progressing more slowly. That's encouraging, and it motivates us to collectively continue our efforts to accentuate that movement,” the health chief said.

France reported 20,155 new cases on Monday, a steep drop from previous days when daily infections topped 60,000, however there have been issues with reporting the daily updates.

According to the government's Tousanticovid phone app the infection rate in France is 429 per 100,000 people – which is a slight drop from over 470 per 100,000 last week. The positivity rate of tests has dropped just below 20 percent (19.8 percent) from almost 21 percent last week.

Hospital numbers still on the rise

Health Minister Olivier Véran confirmed the same on Sunday, November 8th, when he told French radio there was “a form of slowing down” in the progression of the epidemic.

While hospital numbers were still on the rise, they were progressing less quickly, by 20 percent less than the week before, according to the health minister.

French hospitals on Monday reported in total 31,098 Covid-19 patients and 4,677 patients in intensive care units, up by 2,670 and 484 respectively from the day before.

According to the government the current occupancy rate of ICUs is 92.5 percent.

While high, these numbers were not a lot higher than last week, seemingly breaking with the trend of rapidly increasing hospital rates.

“By the end of the week, we will have consolidated data,” Véran said, adding that “either way there will be an increase in hospitalisations and intensive care (admissions) in the coming day because that reflects the epidemic situation before the lockdown.”

READ ALSO Would the French accept being in lockdown over Christmas?

Will shops get to reopen this week?

When French President Emmanuel Macron announced the imminent nationwide lockdown to be imposed on October 30th, he said the situation would be reviewed in two weeks, which will be this coming weekend.

Every 15 days, the president said, government would decide on whether the situation had sufficiently improved so that some non-essential shops could reopen, or rather whether they needed to impose new restrictions.

French shop owners who were told to close down during the lockdown have been hopeful that things would look good enough in order for them to reopen their businesses soon.

But imminently relaxing the rules did not seem to be on the government's agenda this week, with Economy Minister Bruno Le Maire saying on Monday, November 9th, that he favoured a reopening of shops “before Christmas”.

“As soon as it is possible.. when health conditions are met, we will reopen all the businesses, also allowing openings Sunday openings so that [they] can catch up as much as possible on the income lost,” Le Maire told BFMTV.

France's currently lockdown runs until December 1st, but the government has been clear that it could be extended if the health situation demands it.

Hospitals have had to cancel other treatments despite ramping up patient transfers in between regions.