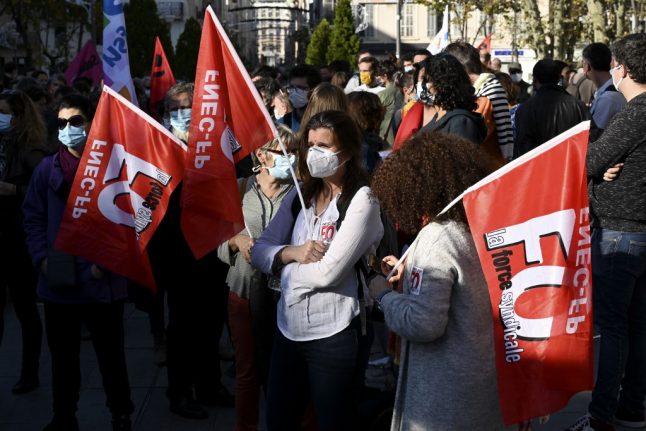 It's been a day of industrial action in France as teachers have been on strike in protest at health rules that they say are too lax.

While the nationwide turnout was only around 10 percent of teachers, Paris saw several scuffles as students attempted to picket the entrance to schools and lycées.

Clashes between police and high schoolers in Paris this morning during a planned teacher's strike to protest the current health measures in place in the country's schools. https://t.co/IMZPTP5Zmx

This type of picket is known in French as ‘blocus’ and is common during protests or industrial action.

The above tweet, showing video footage of French police, is topical for two reasons – if this new bill that is due before the French parliament is passed it could actually become illegal to publish this kind of footage – if the police believe that the person holding the camera has an “intent to harm” the officers they are filming.

Unsurprisingly, there is huge disquiet in the country over the possible effect on the freedom of the press, among other issues, of the bill, which has been backed by the country's Interior Minister Gérald Darmanin.

France’s Director General of Health says the country has not yet reached the peak of the Covid-19 second wave, 10 days after the second lockdown began.

Speaking of lockdown, we’ve had a lot of questions on what exactly constitutes an ‘essential’ trip out shopping, and which box on the form you should tick for various errands, so we have prepared a mini guide here.

And it was also announced today that Prime Minister Jean Castex will be holding a press conference on the latest on the health situation on Thursday evening.

This is a scheduled review – when the second lockdown began on October 30th it was set to last until December 1st with a review after two weeks – but it should give us at least some idea of how long the lockdown is likely to last, even if new measures are not announced on the spot.

.. aaand we're set for another prime minister press conference on Thursday, 6pm, which @LocalFR_Emma and I will follow live for @TheLocalFrance. Bets in favour of lockdown being extended until spring? https://t.co/6HuZryy7qy

As ever, we will be following the press conference live – from 6pm (French time) on Thursday it will be on our homepage.

Jingle all the way

Festive types will be delighted to note that the French government considers Christmas trees an essential purchase.

At this stage we don’t know whether we will still be in lockdown at Christmas – we may know more after Thursday – but according to this poll, 70 percent of French people say they would accept lockdown being extended over the festive season if the health situation demanded it.

Tomorrow is a public holiday in France for Armistice Day – here is how the scaled-down commemorations will look this year. The traditional Paris military parade has been cancelled because of the lockdown. Photo: AFP

What will continue as normal is the president laying a wreath at the Tomb of the Unknown Soldier beneath the Arc de Triomphe, and did you know how France chose the body that lies beneath the eternal flame on the soldier's tomb?

As we remember those who died for their country, it seems like a fitting time to remember a former member of the French resistance who died last week at the age of 99. As well as being obviously very brave, Pierre Simonet also sounds like a lot of fun, as his unathorised flying stunt during France's 1945 victory parade suggests.
Language learning
For adults, learning a new language is often a matter of sweating over grammar books and years of effort, but there's a persistent trope that children just 'soak up' new languages like a sponge. It's often not quite as simple as that, though, so we've asked French language expert – and mother of a bilingual daughter – Camille Chevalier-Karfis for her top tips on raising a bilingual child.
For those of you learning French as an adult though, here are some useful words relating to a topic that will always be relevant in France – strikes.
Une grève/en grève/les grevistes – A strike/on strike/the strikers
Un movement social – any type of industrial action or social movement. This is the phrase most commonly used on announcement boards to explain the reason for a closure or delay.

Retardé – Delayed. If you train/bus/plane is delayed you will see retardé on the notice board, or more specifically xx minutes en retard or retardé par xx minutes –  xx minutes late.

La pagaille – Chaos or a shambles (useful if you want to complain about the effects of a strike).