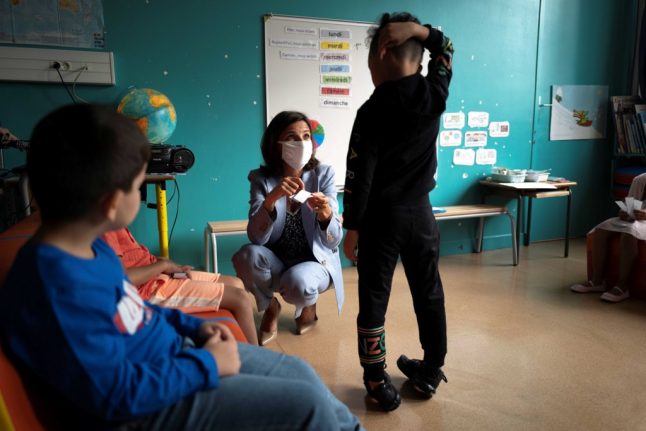 Raising a child fluent in two languages is not all plain sailing. Photo: AFP

While children undoubtedly do learn languages more easily than adults – and are less self-conscious about using them – that doesn't mean it's plain sailing to raise a child with two languages.

We asked Camille Chevalier-Karfis, who in addition to being a French language is expert is the mother of a bilingual daughter, for her tips of making the process as painless as possible.

READ ALSO Parents reveal: The hardest things about moving to France with children

1. Be clear why you are doing this

Everyone has a different motive for trying to raise a bilingual child – for Anglophones moving to France it's a matter of simple practicality that children speak French to navigate daily life (and it's quite handy to have a mini-translator sometimes when your own French fails).

For others it can be a matter of communicating with grandparents and extended family in another country, or just a skill that you want to pass on.

Camille says: “You need to be clear, both to your child and in your own mind, why you are doing this and why you are asking your child to make this extra effort in learning more than one language.

“Whether it's to be able to communicate in the country you live in or just because you think it will be a useful skill for your child to have, get it clear in your own mind first and then make sure you communicate this to your child.

“It's undoubtedly easier to just learn one language, so you need 'buy in' from your child if they are going to make the effort, and they need to know why they are doing this.” 2. Set ground rules – for yourself and your child

If you are a couple with two languages it will probably fall fairly naturally that each person speaks to the child in their mother-tongue, but if that's not the case then you may have to set some rules on which language is spoken and when.

This makes things simpler for the child and ensures that they have a relatively equal amount of exposure to each language.

Camille says: “It's important that you come up with some ground rules, for the whole family. And you need to stick to these as much as your child does – don't expect them to forget or ignore it if you start bending the rules because you are tired or busy!”

Camille and her husband Olivier, who are both French, moved to the USA before their daughter Leyla was born. From a young age she was speaking English all day in nursery, so the couple decided that home would be a French zone.

Camille says: “Olivier and I spoke to her in French at home, and we also had a rule about French-only TV. She was speaking and hearing English all day in pre-school, so we wanted her to have as much exposure to French as possible.

“But when we moved back to France we reversed the situation. Because she was speaking French all day in school we made the home an English zone and had only English TV.

“Now she's 16 and bilingual, so the rules are more flexible, we switch languages and also watch TV shows in both languages.”

For adults, learning a new language often means verb tables and embarrassing gaffes, but when teaching children it's vital to keep the whole process fun if you don't want a rebellion on your hands.

Camille says: “We always wanted to keep the whole process as much fun as possible for Leyla. When she was little in the USA she loved watching TV, so we said she could have as much TV as she liked – as long as it was in French. She started off singing along to the French version of The Jungle Book and I also found some great computer games for her that were in French.

“When we came back to France she was allowed to watch TV when she wanted, but in English. English also became something fun she could do with me – when we were out we used to talk to each other super-fast in English and it became like our secret language.

“When she started English classes at school we were very fortunate that her teachers allowed her to help the other pupils and often set her other work so she didn't get bored. We had only one rule for her – she must never, ever correct the teacher's English.” Leyla, with her dad Olivier, about to head to the USA for intensive English practice. Photo: AFP

4. Have as much exposure as possible

Even if a child grows up hearing two languages, they won't end up totally fluent without regular exposure to both, so you do need to keep working to ensure they keep both languages up.

Camille says: “When Leyla was younger the thing that really made her bilingual was her trips back to the USA. During the year, despite us speaking English with her, her French accent would get stronger and she would find it harder to remember the right words. But then over the summer she would go to the US for four or six weeks and stay with friends, and each time she would come back totally fluent again.

“Languages are like any other skill, you have to keep them up if you don't want to lose it.”

5. Don't worry too much if it doesn't seem to be working

Some children are more willing than other to learn languages and even within the same families there can be marked differences in fluency. While this can be difficult for parents – and can feel like a very personal rejection if a child doesn't want to speak your language – things often change over time.

Camille says: “Some children find languages easier than others, that's just a fact.

“Also don't underestimate how much children need to fit in, especially at collège age, when don't want to do anything that will make them 'stand out' to their friends.

“Even if they're not willing to speak a language that doesn't mean they don't understand it, and often if they start learning it again as an adult they will find it flooding back, so nothing you do is wasted, it might just be in storage.

“For Leyla now, being bilingual is not just a skill, it's part of her identity and she likes to talk about her American side. When we had German exchange students at school – who all spoke English but barely a word of French – Leyla was suddenly the most popular girl in school because she could interpret for everyone.”

6. It may have other benefits

While speaking two languages is pretty impressive, there is plenty of evidence that children who grow up with more than one language find it easier to learn a third, fourth or even fifth.

Camille said: “I think that's certainly true, Leyla is now studying Spanish and has done some German as well.

“For me the difference is that children who grow up bilingual are not always trying to translate everything exactly, they understand that different languages have different ways to express things and they tend to link words to images or feelings, which is a much better way to learn.” Camille Chevalier-Karfis is a French language expert, and founder of FrenchToday.com To read a longer version of this article, head to French Today here.