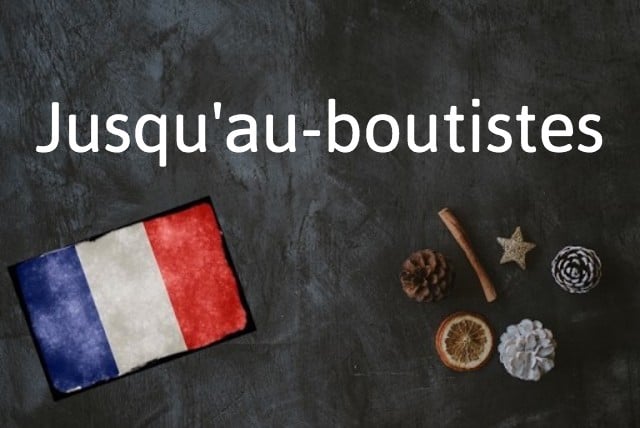 Why do I need to know jusqu'au-boutiste?

Because it's a common caricature of French politicians, which supposedly originated as a timely war reference.

As you may know, jusqu’au bout is a common French expression that means ‘all the way’ or ‘until the end’. Jusqu’à means ‘until the’ and le bout means 'the end'.

On ira jusqu’au bout – we will go all the way.

A jusqu'au-boutiste, therefore, is a person willing to go all the way for their beliefs. It's an 'all-the-way-ist' – in the same way we call followers of liberalism 'liberalists' or communism 'communists'.

According to Expressionfrançaises.fr, the expression originated during the 20th century during World War I. Les jusqu'au-boutistes wouldn't give up, no matter the (human) cost.

Today it's a caricature more than anything, often used as a pejorative way of talking about politicians who are too 'radical', or even 'extremist', according to French online dictionary l’Internaute.

Some have used it to poke fun at US president Donald Trump because of his perceived stubborn reluctance to concede that he might not have won the election.

For example, les jusqu'au-boutistes Fillon refers to the 'Fillon-fanatics', those said to want to support the former leader of Les Républicains (French Conservative Party) even after he was exposed for having committed fraud.

But it can also simply mean ne pas baisser les bras (not to give up).