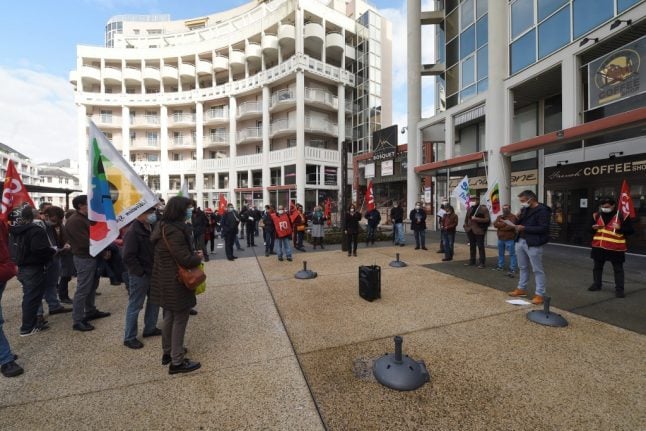 Not all teaching unions joined the strike action, which was called to protest the current Covid-19 health situation in school, and its impact varied around France.

France's education ministry said on Tuesday afternoon that 9.58 percent of the country's teachers participated in the strike action.

In Paris the level of participation was slightly higher in secondary schools (15.3 percent), but down at 4.5 percent in high schools (although 8.7 percent in technical colleges).

In the country's collèges (secondary schools), 45 percent of teachers participated, according to SNES-Fsu.

“The objective is that the schools remain open until June, but without additional resources, how are we going to ensure social distancing and reduce staff?” David said.

“We must go further to ensure the safety of staff, students and their families with measures for secondary schools – much forgotten in the ministerial announcements; a clear framework for the functioning of half classes; details on other elements of the health protocol, including cleaning and ventilation of rooms, which remain vague in the current protocol.”

Students of five Parisian high schools attempted to stage blocus (blockages), which is the French term used about physically blocking the entry during a strike action.

My son's school in Paris this morning: riot cops baton charge and fire tear gas after kids tried to lack school entrance in protest at lack of anti-virus measures. https://t.co/9BnTLnvXzj

Videos on social media showed how police officers sometimes clashed with the high schoolers as they tried to pile bins outside their school gates.

The protocol in French schools has varied significantly during the pandemic, from a total closure in March, April and May to the current situation where schools are hosting full attendance, but with a raft of rules in place including compulsory masks for all pupils over the age of six and teachers.

Last week education minister Jean-Michel Blanquer announced the cancellation of many exams for the 2021 baccalaureate, as well as a guarantee of 50 percent face-to-face teaching time for all pupils in lycée (high school).

At present most lycée classes are in-person, so the announcement seems to herald an increase in online teaching for older students.

Universities are already limited to having half the normal number of students in lecture halls, and are running some teaching online.

Pupils at some French schools have already staged protests over health regulations that they say are too lax.