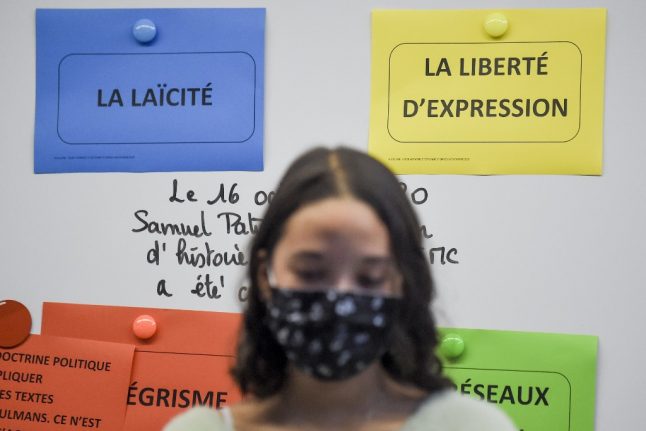 French teaching unions have called for a nationwide strike tomorrow in protest at the anti-Covid measures, which they say are too lax. Since the beginning of the pandemic, France's schools have seen a range of different measures from total shutdown to a mixture of in-person and online teaching, as well as strict rules on mask-wearing in class.

The strike comes as the health situation in France becomes increasingly grim, and over the weekend deaths from Covid-19 topped 40,000. We've been looking a little more closely at the latest numbers so here’s a more detailed breakdown of the data on deaths, hospitalisations and case numbers. The Tomb of the Unknown Soldier at the Arc de Triomphe is normally the site of a military parade on November 11th. Photo: AFP

Health measures and lockdown also mean that France’s Armistice Day commemorations on Wednesday will be greatly scaled down, although the day is still a public holiday. If you want to pay your respects anyway, you can make a donation online or wear a bleuet (cornflower) which is the traditional flower of remembrance in France.

The shooting of a Greek Orthodox priest in Lyon – initially feared to be a terrorist attack – has been revealed to be the result of a domestic dispute with the shooter alleging that the priest had had an affair with his wife.

“The priest is very into sex, and he is very adventurous with the ladies,” a police source close to the inquiry told French daily Le Parisien.

Of the course the big news of the weekend came from across the Atlantic, Emmanuel Macron has congratulated US president-elect Joe Biden on his election victory, while many politicians in Paris have also said 'welcome back' – a reference to Biden's pledge to return America to the Paris Accord to deal with climate change.

And video clip of the weekend has to be this one, of the guy dubbed ‘Omelette Man’ crashing a French TV interview.

This was our favourite clip from the US election weekend – a dozen French clichés in one place and a guest appearance for the 'hon hon hon' laugh #omelettedufromage https://t.co/SJwFoVKsmG

I defy anyone to watch that clip without a smile, but it’s also reawakened an old question – why do people think that the French go ‘hon hon hon’ when they laugh? And our French word of the day is a great phrase for when people will just not give up, so that might also be applicable to a certain figure on the world stage.

For more French words, phrases and colloquialisms, head to our Word of the Day section.
This is a new feature that we're trying out for our members, so let us know what you think – is it helpful? Is there anything you would like to see more/less of? Send your feedback to [email protected]