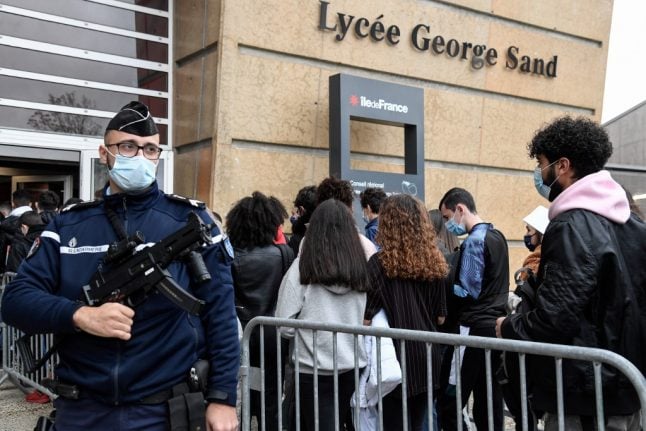 It was the third day of demonstrations by teenagers at high schools, or lycées, sometimes with the backing of teachers, claiming that “non-existent” anti-infection measures are placing them at risk.

Several hundred students blockaded the lycée of Bourdonnieres in Nantes in western France, holding up traffic outside and burning trash cans, according to police who dispersed the gathering and arrested two people.

In a statement on Instagram, a group calling itself the “Bourdonnieres high school movement” denounced “the endangerment of teachers and pupils… with all the mixing in a high school of 2,000 students, notably in the canteen where social distancing is impossible”.

In nearby Saint-Nazare, police had to intervene at the Aristide Briand high school, and in Tours in central France, teenagers blocked access to their school using trash cans and pallets.

“We are 30 in some of our classes and we are afraid of spreading the virus,” one student, who gave his name as Dimitri, told AFP.

In Caen in the north, teachers at the lycée Malherbe walked out as well.

“The worry is the canteen. There are 1,900 children eating in the canteen. Outside it's OK, but as soon they enter the corridor, the children queue up one against the other. It's not manageable,” parents' union representative Christophe Lajoie told AFP.

In the northern suburb Seine Saint-Denis, pupils at the high school Paul Elouard complained about the cost of masks, which they had to change several times a day.

“It's expensive, so that means we're not able to change them every two hours, so obviously there are risks of catching the virus,” Laurie said.

Clashes erupted between pupils and police outside the Paul Elouard high school on Wednesday.

There were also demonstrations at high schools on the French island of Corsica, in Seine-et-Marne east of Paris and in Pont-l'Abbe on the west coast.

On Wednesday, a blockade at a school in the capital's northern suburbs resulted in four arrests.

According to Philippe Vincent of the SNPDEN union of school principals, pressure was building in schools still expected to accommodate as many as 35 children per class.

“Wearing a mask is not enough,” he told AFP. “We are not managing to avoid mixing of groups, to respect social distancing, to aerate the classrooms as they should be. We have reached the limit.”

The union has written to the education minister to request splitting classes and welcoming pupils on alternate days for the coming weeks.

The SNES-FSU teacher's union, meanwhile, has called a nationwide strike next Tuesday over the state of affairs.

Paris Mayor Anne Hidalgo asked the national government on Thursday to allow libraries, theatres and gymnasiums left abandoned under a new nationwide lockdown to be used as classrooms to ensure adequate social distancing for pupils and staff.

The role of children in transmitting the coronavirus has been a point of contention among scientists.

Children do not tend to fall ill with the virus themselves, making it hard to track whether they may be responsible for infecting others.

Most schools in dozens of countries were shuttered by governments during lockdowns during the first epidemic wave, but the second time round more are remaining open.