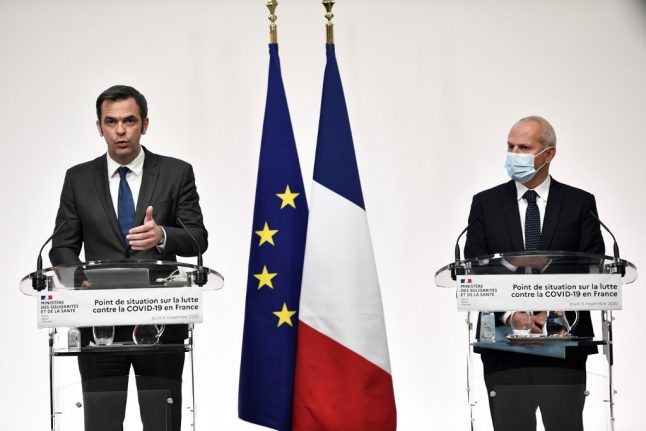 Speaking during his weekly briefing, health minister Olivier Véran stressed that the situation in French hospitals was now extremely serious, and urged the public to stick to the rules of the second lockdown, which was imposed on October 30th.

Oh Thursday France reported a new record of 58, 046 new infections in 24 hours and another 363 deaths in hospitals. As of Thursday there were 28,426 patients in hospital including 4,230 in intensive care.

READ ALSO What are the rules of France's second lockdown?

France is now the country with the highest number of Covid-19 cases in Europe at 1.6 million.

“The more rigorous we are, the shorter the lockdown will be,” Véran told the press conference.

He said that without the lockdown, France's intensive care units risked being overwhelmed by mid-November.

“The situation is very serious – the second wave is here and it is violent.”

Already hospitals in many parts of the country – including Paris and the Auvergne-Rhône-Alpes region in eastern France – are under pressure and have began transferring some of the sickest patients to other hospitals.

Véran said the central – eastern region of Auvergne-Rhône-Alpes was the part of the country the worst hit by the second wave of the virus.

Véran said that 200 patients had already been transferred – 61 from the Auvergne-Rhône-Alpes region. Earlier in the week hospital chiefs confirmed they had begun the transfer of patients to Germany, echoing the massive patient transfer operation that France ran during March and April.

France's Director General of Health Jérôme Salomon added a stark warning that the state of the epidemic was “serious” and that many patients do not survive intensive care.

“One in four patients admitted to ICU with Covid-19 do not survive.”

Véran said that for everyone who tests positive for the virus, 90 percent will have either mild symptoms or no symptoms, eight percent will need hospital treatment and two percent will end up in intensive care.

Some hospitals are already having to cancel planned operations and other treatments in order to enlarge their intensive care spaces, but Véran added that it was vital to maintain consultations and treatments for other ailments as far as possible.

The minister estimated the the peak of the second wave will be in mid November and will be very high, but “less intense” than in March and April, when daily deaths peaked at 600.

He added that without France entering lockdown on October 30th the second wave would have been even worse, with 9,000 patients needing intensive care beds by mid November.

He said he believed that the lockdown was in general being respected, but called for people to continue limiting their outings from the home as much as possible.

France's second lockdown – which sees schools and some businesses remain open but requires everyone to have a permission for stating their reason for 'essential' outings every time they leave home – runs until December 1st. However the government has said that it could be extended if the health situation requires it.

READ ALSO What does it mean that France has extended its state of health emergency until February 2021?