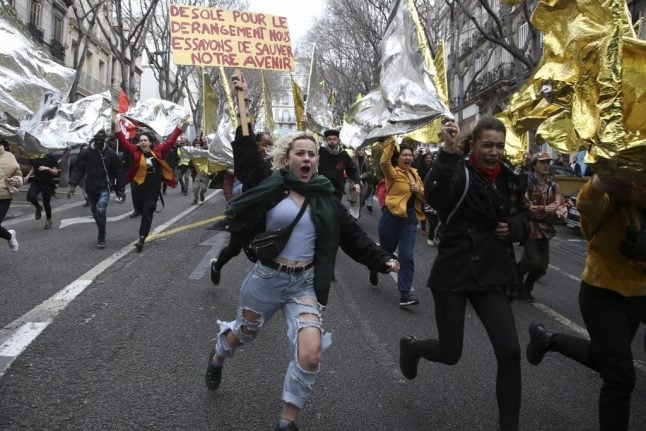 Female students participating at a demo for gender equality and against a controversial pension overhaul in Marseille, southern France, on March 5th, 2020. Photo: AFP

“As of this day, women in France start working for free until the end of the year, due to salary inequalities,” said Les Glorieures, a feminist media platform.

They were referring to the number of days of paid work that, in women's case, disappear into the gender pay gap in France.

Women in France earn on average 15.5 percent less than men, according to the latest Eurostat report.

When converted to work days, that meant women will 39.2 work days without getting pay that they would have gotten if they were men.

All European countries have a gender gap, according to the report, but France's was higher than the average of 14.8 percent.

France's gender pay gap has remained relatively stable over the last years, it was at 15.5 back in 2013 and went slightly up and down in the period that followed, before reaching the same level again.

The current gap was slightly larger than last year, up from 15.4 percent, meaning women in France worked for “free” as of 4.47pm on November 4th in 2019.

For the full list of pay gaps in European countries, see the image below: