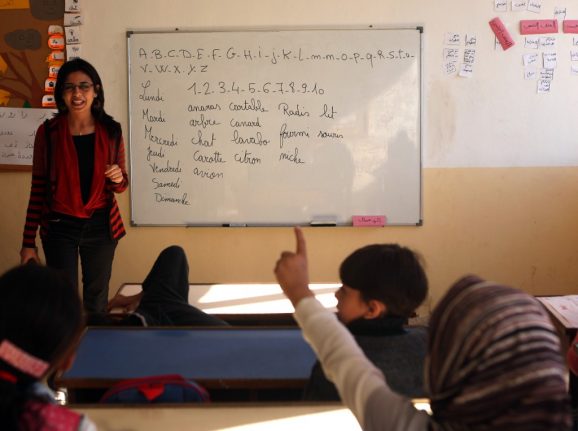 What are your options if your French is still at beginner level? Photo: AFP

How much French you will need for your daily life very much depends on your personal circumstances, but also where you are – in tourist hotspots like the French Riviera English is fairly widely spoken and in Paris plenty of people speak at least some level of English.

But don't expect everyone to speak English, especially in areas off the tourist trial – France regularly comes out towards the bottom of levels in English-language competency in countries around Europe and older people in particular often don't speak any English.

It's considered quite rude to just start talking to a French person in English and assuming they understand you so it's always better to have looked up in advance a phrase to cover your request – if the person you are talking to does speak English they will generally be happy to switch languages and help you out.

And always remember the one crucial French word – bonjour. Starting any interaction with the courtesy of a bonjour (or bonsoir if it's evening) is important if you don't want to come across as rude.

Depending on where you are, it's possible to stay within a 'bubble' of fellow Anglophones, although we would suggest that's less fun and less interesting than trying to immerse yourself in the local culture.

READ ALSO Where in France do all the Americans live?

Moving countries does require some paperwork and France is famous (infamous?) for its bureaucracy.

There are some exceptions to this – the tax office has this page in English for foreign residents and certain sections of the government's visa website can also be found in English.

If you have questions about French healthcare, the state healthcare provider Ameli also has an English-language helpline on 09 74 75 36 46.

The newly created online portal to allow British residents in France to apply for post-Brexit residency is available in English, and France is also running a campaign called Choose France to lure new businesses and tech investors to the country which has resources in English. Ski resorts offer jobs where speaking French is not a priority. Photo: AFP

But if you want to move to France to work you're likely to need more complex language skills than bonjour, une baguette s'il vous plaît.

Our sister title The Local Sweden runs articles on whether you really need to learn Swedish at all, given how widely English is spoken in Sweden, but that's not really an issue in France, where 99 percent of jobs will require you to speak at least some French.

Au pair – this is a popular option for younger people. In exchange for domestic chores and childcare you get accommodation and time off during the day to go to language school. If you're coming from outside Europe there is a specific au pair visa.

English teacher – France has a lot of language schools and English is a sought-after skill. Some language schools offer packages where you teach English and get some free French lessons in exchange, but because of the abundance of candidates the pay is often pretty low.

Ski instructor – you obviously need to be able to ski before considering this one, but if you are a qualified instructor there are plenty of resorts in France that cater largely to British or American tourists so you won't need much French. If you are not a qualified instructor there are also plenty of seasonal jobs in ski resorts that don't require much French. Doing a ski season in France is popular with younger people but these jobs are generally pretty badly paid – albeit good fun.

Bartender – unless you're working in a bar frequented only by English-speakers this is quite a hard job to do if you don't know any French at all. If you have the basics and are looking to improve, however, it's a great option and you will learn lots of colloquialisms and hear French as the locals speak it.

Freelance writing/editing – in an increasingly technological world it is of course now possible to live in France while working remotely for a company back in the USA/UK/Ireland. The pandemic has seen a big rise in remote-working for certain types of job so if you've been working from home since March, now might be the time to ask your company whether you couldn't equally well work remotely from a cute French village.

International Organisations – Global organisations like the OECD and the UN have offices in France and these generally have a very multinational staff and use both English and French as working languages so it's possible to work without being a fluent French speaker.

Tourist business – a lot of new arrivals also set up their own businesses in the tourist sector – running gîtes, B&Bs, bike hire etc and this is also possible to do if you're catering to a largely English-speaking clientele. You will need some French to ensure you've done all the complicated bureaucracy necessary to register your business though – find out more on that here. Slogging through a bit of French grammar is unfortunately unavoidable if you want to learn the language. Photo: AFP

But if you see your long or even medium term future in France, then you will want to learn French. While in certain areas of Spain it's quite common to find British immigrants who don't speak a word of the local language, in France this is more unusual and if you meet someone who speaks very little French it's likely they've not been here very long.

There are exceptions of course, but most people make at least some effort to learn French, even if they never quite master the the correct pronunciation of serrurerie (locksmith) or the city of Rheims.

And the good news is that there are plenty of resources to help you learn. In the cities – especially Paris – there are dozens of language schools doing either intensive tuition or evening classes and many also offer online programmes for those in rural areas.

As a native English speaker, you also have a valuable skill to offer in return and there are plenty of 'language swap' or 'French exchange' groups where you spend half the time speaking French and having a French native correcting you before switching to English and offering help and tips.

French people – especially Parisians – have a bit of a reputation for being unhelpful to beginner French-speakers but that's really not been our experience. The majority of French people are keen to help if you are making a genuine effort with their language. You will often find your grammar or pronunciation corrected in everyday exchanges, but 95 percent of the time this is done with a helpful intent – just think of it as free language tuition and say merci.