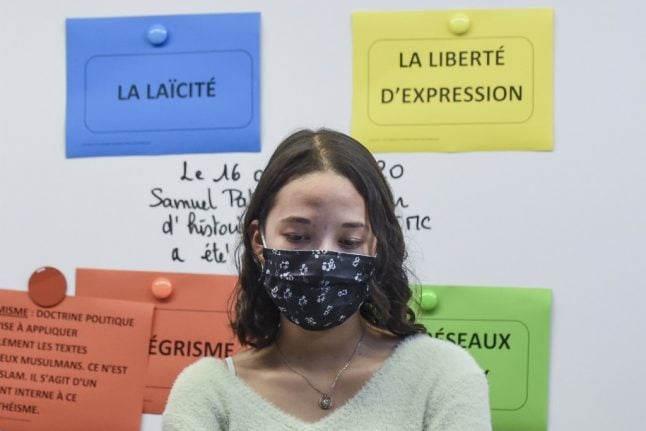 Schools held a minute's silence in memory of the slain teacher. Photo: AFP

Schoolchildren across France observed a minute of silence at 11am to remember Samuel Paty, who was killed in Conflans-Sainte-Honorine, west of Paris, on October 16th.

Paty had shown his class cartoons of the prophet Mohammed for a lesson on freedom of expression, sparking an online campaign against him.

Last Thursday, three people were killed by a knife-wielding man at a church in the southern city of Nice in the latest attack to be labelled an act of “Islamist” terror by the government.

Schoolchildren – wearing masks because of the coronavirus pandemic – stood behind their desks or in schoolyards for the minute of silence.

The gesture was matched at schools in Germany and Greece in a show of solidarity.

“I know your emotion after the terrorist attacks, including one in front of a school against a teacher,” Macron said in a message to pupils on his Snapchat, Instagram and Facebook social media channels.

“Today, in class, you will pay homage to Samuel Paty. We will all think of him, you and your teachers,” he said, adding: “The plan of terrorism is to manufacture hatred.”

Classes in France resumed after the holidays with the country on maximum terror alert and armed gendarmes stationed outside some schools. Teachers had previously held their own tribute to their murdered colleague. Photo: AFP

“I hope that they (the pupils) will have understood the essential idea that in France there is freedom of expression and when you are not happy with an opinion, you go to a judge. You never take justice into your own hands,” teacher Paul Airiau told AFP at the Grange aux Belles college in Paris.

Prime Minister Jean Castex travelled to Conflans-Sainte-Honorine to pay his respects to Paty, saying he had “taught every child of the Republic to be a free citizen.”

“For him, for our country, we will continue. It is our honour and our duty,” Castex tweeted.

Macron has vowed to defend the right to freedom of speech after the furore created in many Muslim countries by the republication of cartoons of the prophet Mohammed in September by satirical weekly Charlie Hebdo.

It did so to mark the start of the trial of suspected accomplices in the 2015 massacre of its staff by Islamist gunmen.

The trial has been postponed for at least a week after three defendants tested positive for coronavirus.

Following angry protests in the Muslim world over his defence of the right to publish cartoons, Macron told Al-Jazeera television over the weekend that he understood the caricatures could be shocking for some.

In the latest protest against France, at least 50,000 gathered in the Bangladesh capital Dhaka on Monday for a rally which started at its biggest mosque but was prevented from approaching the French embassy, police said.

Prosecutors say Paty was beheaded by an 18-year-old Chechen man, Abdullakh Anzorov, who was spurred to act by a social media campaign started by one parent at the school who was angry that children were shown the Charlie Hebdo cartoons.

Anzorov was killed by police.

Last week's stabbing rampage in Nice is suspected to have been carried out by Brahim Issaoui, a 21-year-old who arrived illegally in Europe from Tunisia in September.

He remains in a serious condition in hospital after being shot by police, but his life is no longer in danger, said a source close to the investigation.

Two are still being held, including a fellow Tunisian aboard the boat that brought Issaoui to the Italian island of Lampedusa on September 20, added the source who asked not to be named.

France's Interior Minister Gerald Darmanin said he would travel to Tunisia and Algeria this week to discuss the fight against terror, and would also soon visit Russia.

Adding to tensions, a Greek Orthodox priest is in a serious condition after being shot by an unknown assailant armed with a sawn-off shotgun in Lyon on Saturday.

However an individual arrested over the shooting was released on Sunday and the authorities have not handed the case to anti-terror prosecutors.

Graft-fighting group Anticor triggered the probe by filing a criminal report in June, with the investigation launched in September.

In a statement, the Bank of France said Goulard – a former MEP and briefly defence minister under President Emmanuel Macron in 2017 – would be leaving her post as one of the institution’s deputy governors on December 5.

Returning to the foreign ministry?

She wished to “return to the foreign ministry” where she started her civil service career, the bank said.

A source close to Goulard told AFP that her departure had “nothing to do with the investigation”.

“Neither Sylvie Goulard nor her lawyer were informed that the investigation had been reopened,” the source said.

A previous probe in 2019 was closed the following year after no crime was found, case files seen by AFP showed.

Anticor questioned in its complaint the work Goulard performed for the California-based Berggruen Institute think-tank.

She has acknowledged accepting 10,000 euros ($10,530 at current rates) per month working as a “special adviser” to the Council for the Future of Europe, an offshoot of Berggruen, between 2013 and 2016.

Goulard, who was also an MEP at the time, said her work had “no relation of any kind with the business activities” of the group’s founder, German-American billionaire Nicolas Berggruen.

Her lawyer declined to respond Friday when contacted by AFP.

The Berggruen Institute denied in 2019 that Goulard had been given a fake job, highlighting that she organised meetings in Brussels, Paris and Madrid.

Goulard has also been charged in a probe into suspected fake jobs among assistants to MEPs from the Democratic Movement, a small centrist party that supports Macron.