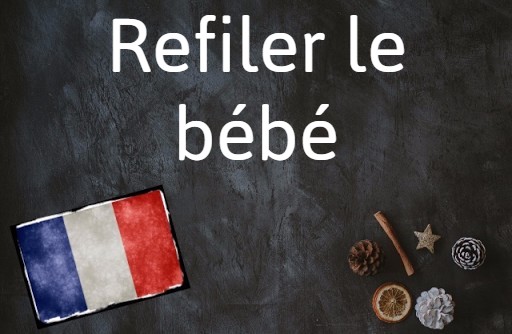 Why do I need to know refiler le bébé?

Because this kind of cynicism is typically French.

Refiler le bébé literally translates as ‘to give (someone) the baby’.

However, refiler is different from donner (to give) or offrir (to give) in that it implies that the item passed on is unwanted or dumped on someone.

Il m'a refile son vieux pull comme si c'était un cadeau – He passed on his old sweater as if it were a gift.

Of course, passing on a sweater is not the same as giving them a baby, which needs constant care and attention, poops all day and will keep you up most of the night.

Refiler le bébé means more than just passing over a task to someone else, it's getting rid of a problem by leaving another person with the responsibility – passing the buck, in other words.

If you feel like you have accepted a task too quickly, or if you changed your mind, you can try and refiler le bébé to someone who is more likely to succeed, or to someone you don't like.

On m’a confié l’organisation du festival mais je n’ai jamais fait ça, je vais tenter de refiler le bébé à Antoine – I’ve been given the task to organise the festival, but I’ve never done it before so I will try to pass the buck to Antoine.

Be careful, refiler le bébé is a pretty colloquial expression that should not be employed in formal situations. Use it with people you know.