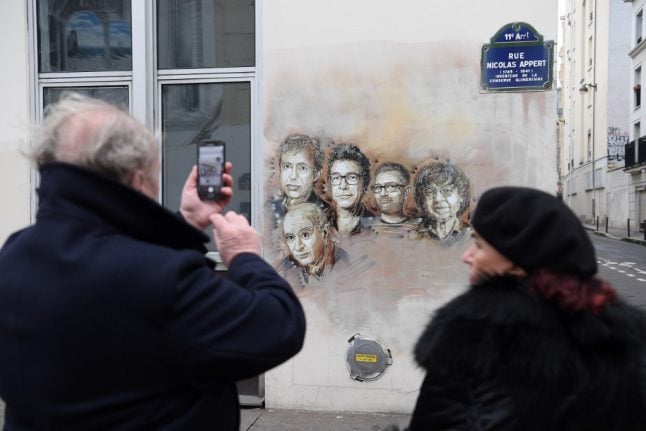 A memorial to the murdered journalists. Photo: AFP

Fourteen people are on trial accused of having helped the killers of 12 victims in the attack on satirical weekly Charlie Hebdo, a female police officer a day later, and four hostages at a Jewish supermarket in Paris.

After primary suspect Ali Riza Polat received a Covid-19 diagnosis over the weekend, the presiding judge ordered all those on trial to be tested.

“In view of the health protocols in force requiring isolation of both positive and contact cases, the hearing will not be able to resume this week,” Regis de Jorna said in an email sent on Sunday to lawyers involved in the case.

The trial had already been suspended until Wednesday following Polat's positive diagnosis, with Jorna telling lawyers the court would not sit again until all the results were in.

Two further defendants then tested positive, with two others remaining under supervision despite negative results as they were believed to be “contact cases”, according to Jorna's email.

The results from the other defendants, detained in Fleury-Merogis, are due on Monday.

The extended suspension of the hearing will further delay the conclusion of the trial, which opened on September 2nd.

Defence lawyers were scheduled to plead on November 6th, 9th, 10th and 11th with the verdict expected on 13th.

France returned to lockdown last week in the latest measure to curb a disease that has infected more than 44.5 million people worldwide and killed nearly 1.2 million.

Christophe Doire, 28, was found beheaded on Christmas Day, 1995 around the town of Busset in the Auvergne region of central France.

Regional prosecutor Eric Neveu said the widow, 56, who has not been named, had been detained on Tuesday and then charged Thursday by a magistrate and remanded in custody.

“Serious and concurring evidence points to her involvement in the murder of Christophe Doire,” he told reporters, adding she had been charged with murder and risked 30 years in prison if convicted.

“The investigations must continue to identify and arrest other protagonists,” he said, noting that elements suggested that the woman was “not alone during this process”.

He made clear it was not possible to make other information public at this stage but said she had failed to give “credible explanations”.

The move comes after Doire’s body was exhumed in April in order to carry out new tests. Neveu made clear that during interrogation the widow had denied any involvement in the killing.

Doire had disappeared on December 16th, 1985 after spending the evening at his brother’s. He left shortly before midnight, saying he was going hunting the next day.

His car was found but there was no sign of him until his body was found in a ditch by hunters. He was identified due to his papers and clothes he had on him.

Cases were twice opened against suspects, in 2000 and 2002, but they were dropped on both occasions and the crime has for years remained one of France’s most notorious cold cases.

FRANCE EXPLAINED
Can France’s Constitution be changed to add the right to abortion?
Url copied to clipboard!