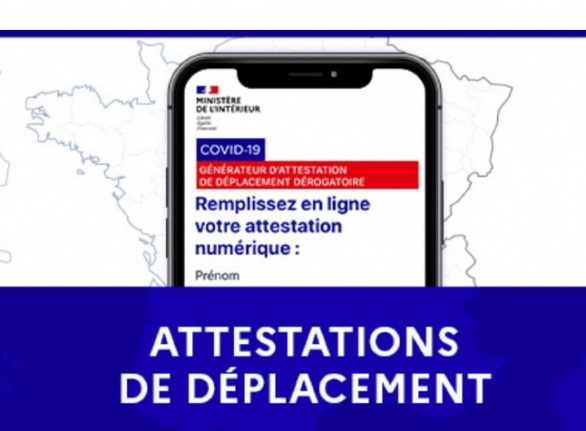 People in France will once again need a permission form – either in paper version or on mobile phone – to leave their homes during the second period of confinement.

The form needed to leave the home, seen below, includes several options members of the public must tick to explain their reason for being outside.

These cover essential trips such as grocery shopping, exercising, visiting a doctor or for imperative family reasons.

There is also a version in English as seen in the picture below.

It is the only one of the three forms available in digital format, in other words a mobile phone version. It is also easily available on France's TousantiCovid smartphone app, which the government is encouraging everyone to download.

You can read the full list of reasons you are allowed to leave you home HERE.

It's worth noting that in spring questions were asked about whether you can tick several boxes at the same time if you leave the house for various reasons such as exercise and then shopping.

Authorities said this was indeed possible and even encouraged to avoid people leaving the house too frequently. The other two forms needed to travel to work or school are only available in French but you can download them HERE.

The form needed to go to work needs to be signed by your employer. The form below is mainly for secondary school children who travel to school on their own. It needs to be signed by a parent or guardian. It also needs to be stamped by the school.