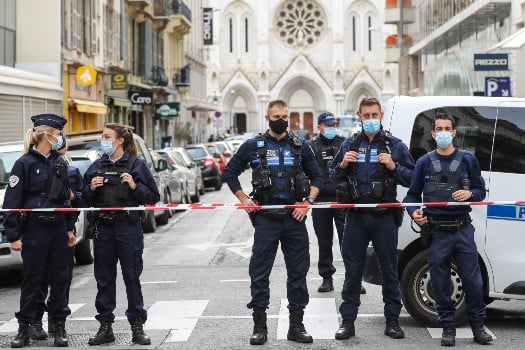 Police stand in front to the Notre-Dame basilica on Friday. Photo

The bloodshed inside Nice's Notre-Dame basilica on Thursday morning added new tension in a country already on the highest alert after a string of attacks blamed on suspected Islamists in recent weeks.

The 21-year-old Tunisian arrived in France this month via Italy before carrying out what the government described as an act of “Islamist” terror inside the church.

The suspected knifeman, identified as Brahim Issaou, was shot multiple times by police in the aftermath of the attack. He has been in serious condition and was not conscious as of Friday evening, a source close to matter told AFP.

A source close to the investigation, who asked not to be named, said the authorities believe Issaou arrived in Nice no more than 48 hours before the attack.

Another source said it was so far unclear what had prompted the young man to carry out the killings.

“He wasn't on any of our security watchlists, either French or European,” Interior Minister Gerald Darmanin said, reiterating that France was “at war with Islamist extremism… an enemy that is both internal and external.”

He added after a top-level security meeting that 3,500 reserves in France's gendarme force would be called up to give local authorities a total of 7,000 members of the security forces at their disposal to ensure security.

Some 4,000 additional French troops will also be mobilised from next week to raise the numbers taking part in the ongoing Sentinelle security operation to 7,000, the army confirmed.

A 47-year-old man arrested on suspicion of contacting the killer the day before has no apparent link to the attack, a source close to the investigation said.

Another man, 35, who had been in contact with the assailant, was detained on Friday evening and placed in police custody, a judicial source added.

President Emmanuel Macron, who held a crisis meeting with top ministers Friday, has already stepped up military patrols at churches and other sites ahead of All Saints' Day on Sunday.

Foreign Minister Jean-Yves Le Drian warned after the meeting that French citizens face a security risk “wherever they are” in the wake of the attack, saying alerts had been sent to all French nationals abroad.

'Didn't mix with others'

In Issaoui's hometown of Sfax in central Tunisia, his family told AFP they struggled to believe he had carried out the attack.

“It's not normal,” said Issaoui's brother Yassine. But relatives said he had turned to religion and isolated himself in the past two years.

“He prayed… (and) went from home to work and back, not mixing with others or leaving the house,” said his mother, crying as she clutched a passport photo of the young man in a white hoodie.

The attacker in Nice had a copy of the Koran, two phones and three knives when he entered the church in the centre of the Mediterranean city at around 8:30 am (0730 GMT), according to France's anti-terror prosecutor Jean-Francois Ricard.

He slit the throats of Nadine Devillers, 60, and Vincent Loques, 54, who worked at the church. He also stabbed Brazilian national Simone Barreto Silva, 44, who managed to flee but later died of her wounds.

Officials said Issaoui shouted “Allahu Akbar” (God is greatest) as he was taken to the hospital after being shot and wounded by police.

The attack came as fears of Islamist violence were already running high, just two weeks after a French teacher was beheaded in a street near his school in a Paris suburb.

The teacher, Samuel Paty, had infuriated some parents by showing cartoons mocking the Prophet Mohammed to students as part of a lesson on free speech, with some denouncing him in a social media campaign.

More than 250 people have been killed in jihadist attacks on French soil since January 2015, when gunmen massacred 12 people at the offices of Charlie Hebdo over its publishing of the Mohammed cartoons.

To mark the start of the trial for 14 suspected accomplices of the attackers, Charlie Hebdo republished the controversial cartoons last month.

Nice's right-wing mayor Christian Estrosi told Europe 1 radio that he wanted to see a change in the constitution in order to “wage war” against what he termed “Islamo-fascism”.

Macron's stance against Islamist extremist violence, and his defence of the Mohammed cartoons, has outraged many Muslims around the world who accuse him of unfairly targeting an entire religion.