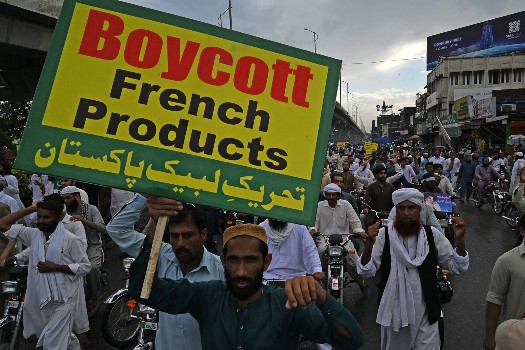 Social media has galvanised outrage among many Muslims over the renewed publications of cartoons of Mohammed by the satirical weekly Charlie Hebdo — with tragic consequences that even the heightened scrutiny of intelligence services was unable to prevent.

The weekly put the cartoons on its front page in September to mark the trial opening for 14 suspected accomplices of the gunmen who massacred 12 people at its Paris office in January 2015, the beginning of a wave of terror that has left more than 250 people dead on French soil.

READ ALSO: Macron says he can 'understand' if Muslims are shocked by Muhammed cartoons

Later in September, a Pakistani man seeking revenge wounded two people with a meat cleaver in front of the office, unaware that the paper is now housed in a top-secret location. He was not on any of France's security watch lists.

“The re-publication of the cartoons was viewed as a new insult and worked as an accelerant,” said Laurence Bindner, co-founder of the JOS Project, which monitors extremist content online.

Calls for violence against French targets soon spread like wildfire on social media, surprising intelligence services which knew the country was already vulnerable to “lone wolf” attackers who are nearly impossible to identify before they act.

“The bitterness against France is no longer just in the jihadist spheres,” Bindner told AFP. “It now reaches from radical Islamic politics to a much larger religious sphere.”

The online hate perpetuated the cycle of violence when an 18-year-old Chechen decapitated Samuel Paty, a teacher who infuriated some parents when he showed the Charlie Hebdo cartoons to students for a lesson on free speech.

Groups linked to Al Qaeda and the Islamic State lauded Paty's killer and flooded the internet with calls to emulate his attack.

Two weeks later, a young Tunisian who arrived in France only in October killed three people at a church in Nice.

“The recent surge of terror attacks in France has shown that now, more than ever before, we need to clamp down on the spread of terrorist content online,” said David Ibsen, executive director of the Counter Extremism Project.

France has already promised tougher action against online hate after Paty's murder – the teacher's name and the address of his school had been posted in the social media campaign against him.

Yet Ibsen said governments face an uphill battle without concerted efforts by the companies providing the platforms that extremists are so easily exploiting.

“The continued ease of access to hyper-violent imagery and videos on social media demonstrates tech companies' failure to keep their promises and address the prevalence of extremist and terrorist content online,” he said.

Bindner noted that since Paty's killing, “there are French tracts posted by non-French accounts, at times showing only mediocre knowledge of the language.”

The content can still be sufficiently effective to motivate receptive listeners, in particular vulnerable or psychologically troubled individuals.