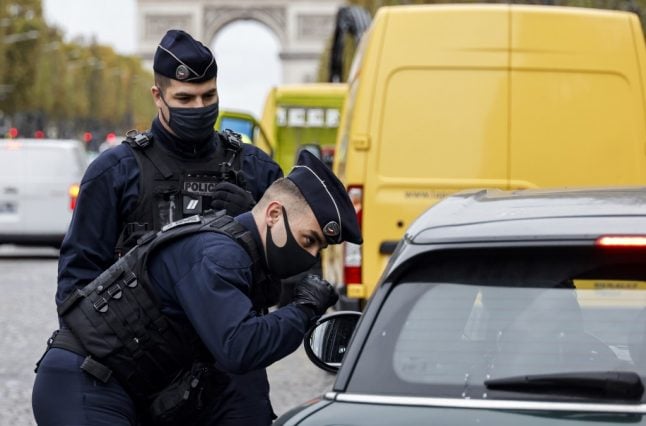 French police officers are again in charge of making sure everyone has a good reason to be outside. Photo: AFP.

The new lockdown added to an already grim mood in France after three attacks in recent weeks blamed on Islamist extremists, the latest the killing of three people inside a church in Nice on Thursday.

There are important differences to the spring this time, most crucially that children will be returning to school after the autumn break, rather than staying home as in the previous lockdown.

And while nonessential businesses are to close, some were still open on Friday. At least four shops – a shoe store, a dry cleaners, a mobile phone store and a Nespresso boutique – welcomed clients at midday on a busy pedestrian street in the Passy neighbourhood of western Paris.

There was also a steady flow of traffic around central Paris, even if public transport was less clogged than usual, raising concern among medics over whether the public would take this round of the lockdown seriously. Traffic on the Champs-Elysées avenue today, not very different from normal days/Photo: AFP

“Crossing Paris this morning looks more like an ordinary day than the first day of a lockdown,” the director of Paris hospitals Martin Hirsch wrote on Twitter.

“Lots is at stake now if we are to avoid being overwhelmed.”

Trains from the provinces back to Paris were busy after President Emmanuel Macron made clear that there would be a period of grace to allow families to return home after the autumn break.

But in the other direction, hundreds of kilometres of traffic jams formed in Paris late Thursday as worried residents of the capital sought to flee in the hours before the lockdown took effect.

The Sytadin traffic site said that there were over 700 kilometres of traffic jams in the Paris region late Thursday, when electronic signs on the Paris ring road bore grim warnings for drivers of had an hour to go before the next exit.

The train station in the northern city of Lille was bustling quietly in the morning as travellers hurried back to Paris. Police looked on but without making overt controls.

“I had planned for a long time to spend some days in Lille then the weekend in Paris,” said Serge, a 62-year-old pensioner who plans to return home to Avignon on Monday.

“I am counting on the tolerance of the police,” he said. Open markets are allowed as well as supermarkets/Photo: AFP


Yet the reality remained that within a space of months France has gone from “confinement” (lockdown), to “deconfinement” as the measures were relaxed over the summer, to “reconfinement.”

As previously, the basic rules are simple and strict. People can go out only on essential business or for exercise, for no more than one hour and within a one-kilometre radius of their homes, Prime Minister Jean Castex said.

And like in spring, every movement outside needs to be justified by filling out an authorisation form, either by hand or online.

Worried social media users posted pictures of supermarket shelves empty of the essentials, but executives insisted there would be no shortages.

The president of the Intermarche chain, Thierry Cotillard, said his supermarkets had been busier than normal but denied there had been any “hysteria.”

Home entertainment and electrical goods giant Fnac-Darty said it was keeping stores open by benefitting from an exemption that allows people to buy goods for home-working. FNAC stores can remain open during the lockdown. Photo: AFP

People at its Paris store were buying more than just office chairs. “I bought two pairs of headphones, for my mom and me,” said Fabrice Angelique, 18, at the multi-storey Fnac store near the Saint-Lazare train station in Paris.

“I am happy. We don't have the choice, we are obliged to live, do our shopping and behave as if it is normal even if there are some safety measures,” he said.

According to a poll by Odoxa-Dentsu Consulting for France Info and daily Le Figaro, seven out of 10 in France are in favour of the new lockdown.

But some angry French took to the streets of Paris late Thursday for an unauthorised protest to condemn the new measures as overly drastic.

“We shouldn't overdo it. From midnight tonight we must all be at home, it's too much,” said one protester, who gave her name as Laura.