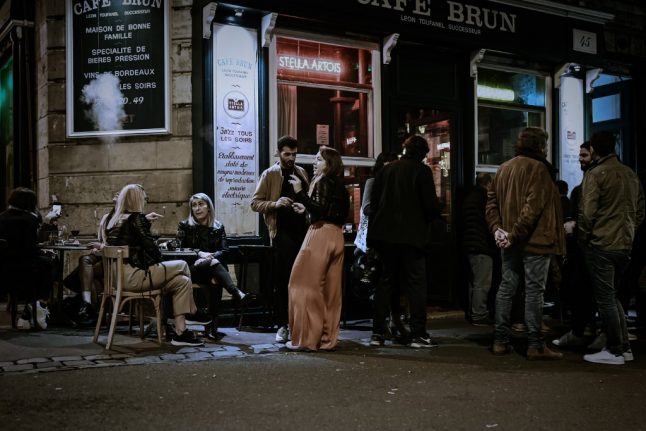 Bar-goers stand outside a bar in Bordeaux, southwestern France, on October 29, 2020, prior to a new national lockdown in France. AFP

President Emmanuel Macron announced the lockdown on Thursday evening, in a live televised speech to the nation where he urged the country to stick together and support each other through this “difficult time.”

But as soon as the president finished speaking, critics slammed him and his government for having waited too long, done too little, with the result that the country now having to suffer through another period of confinement, with the consequences that followed.

“We lost a month and a half in protective measures that could have stemmed the spread of the virus. Today, there is no other solution, it is too late. The second wave is the failure of the test, trace, isolate strategy,” Eric Ciotti, a member of parliament for Les Républicains (LR), told the French Senate.

The last pint…Bars (restaurants that are still open) are rammed in Paris… with 30 mins to go before curfew and a few hours before lockdown kicks in. This will be the last time in a while that we'll see this… Probably not what hospital chiefs want to see right now pic.twitter.com/Ea5IuBi5ms

But when The Local asked our readers in a Twitter poll to voice their opinion on second lockdown measures, an overwhelming majority turned out in favour of the lockdown, even though some readers have expressed doubt about the rules.

Do you agree with the return to lockdown in France? Tell us why/why not in comments below.

“Unfortunately, it is absolutely necessary,” said Ricky J. Marc in a comment on the poll.

“But it will lead to nothing if the measures are not managed like in New Zealand,” he said, specifying that “we need a truly centralised authority” to manage the treatment strategy and logistics.

1/Unfortunately, it is absolutely necessary, but will amount to nothing if this reset of sorts isn’t better-managed à la New Zealand. There must be a gradual reopening of endroits that don’t encourage large congregations. We need to establish a protocol of treatment in hospitals.


Stores and businesses across France were filled on Thursday by people racing to get supplies – and maybe a last-minute haircut – ahead of a new coronavirus lockdown coming into effect at midnight.

Essentials like pasta and toilet paper were in high demand, as were printer ink and electronics for working from home, while yoga mats were no longer to be found at many sporting goods stores.

“I'm stocking up, since we don't know when this will end,” Catherine Debeaupuis told AFP while shopping at an electronics retailer in central Paris.

Like others in a crowded Paris supermarket, Mourad Amarouche was loading up on toilet paper and pasta for his family.

“Just one of each, we're going to stay calm,” he told AFP. “There won't be any shortages, but I'm hoping not to have come back tomorrow, when there will be tons of people.”

Hairdressers were turning away desperate customers, many of whom were not convinced the lockdown would ease on December 1st as Macron said he hoped.

Traffic jams as Parisians head out of Paris tonight before lockdown kicks in. (I won't be among them this time round because schools are staying open). pic.twitter.com/ZVaOmYNjZ0

“Give me something that will last for a while,” Oulaya, a 50-year-old woman who managed to get a spot at the Angelo Capelli salon on the Place de la République in eastern Paris.

At the sprawling La Defense business district west of the capital, employees made a final commute to transfer landlines to mobile phones or give office plants a last watering.

Several people pulled suitcases to empty out their offices of important files or laptops.

This lockdown, which will enter into effect on Friday, October 30th, will not be as restrictive as the one the country went through this spring.

Schools, and necessary services will remain open, but people will not be able to leave their homes unless it is essential, and walks and exercise will be limited to a 1km radius.

READ ALSO: What are the rules of France's second coronavirus lockdown?

Julie Cain, a retired teacher, said she agreed that the lockdown was necessary but “can’t understand why schools remain open.”

Cosy Powell, a mother of two daughters, also said she believed that schools should be closed. “I have to make four journeys a day to take my daughters to school, I have to get out of the car to walk to the school gates,” she said.

Fully agree but close schools too. I have to make four journeys a day to take my daughters to school, I have to get out of the car to walk to the school gates. I can home school, I would prefer too.

But closing schools was judged too detrimental by the government, since children only returned to class in September, and many struggled to follow remote lessons.

This is why Léo, 23, a high school supervisor, fully supports the opening of schools, despite worrying about the pupils’ and teachers’ health.

“Reinforced health measures in schools sound vague and complicated to implement,” he told The Local. “The problem is that the infrastructure does not allow to welcome pupils safely.”

While the government has promised to maintain economic support schemes set up during the first lockdown to help businesses survive, many worry that another temporary slow-down of the economy could have disastrous consequences for those already struggling.

Alexandra, 24, who works in the fashion industry, told The Local that she supported a second lockdown but still felt a little depressed:

“I have lost my job because of the health situation,” she said. “Life sucks right now.”

In the restaurant business too, the decision was met with despair.

“In my family we are all waiters. Financially it is a disaster. I am 46 years old..  I just want to go home and cry,” one waitress told France Bleu.

According to a poll conducted by French broadcaster LCI, 68 percent of spectators thought Emmanuel Macron was convincing in his speech. That was 8 percentage points lower than after his speech announcing the first lockdown, but still high.

“The news of a second lockdown was more unexpected compared to last time, so the fact that we have more than two thirds of French people saying the French president was convincing shows that at least part of this measure has succeeded,” pollster Jean-Daniel Lévy told LCI.

France is currently at around 30,000 daily infections, according to official figures. The virus has exploded across the territory, with Sunday October 25th recording a new record of over 52,000 positive Covid-19 infections in a day.

READ ALSO: Why France's second wave of Covid-19 is very different to the first

“If we did nothing… within a few months we would have at least 400,000 additional deaths,” Macron said.

While it seems like the country mostly supports taking stricter measures, they don't necessarily agree on the timeline set by the government.

Epidemiologist Dominique Costagliola told French radio RTL that “four weeks might be too short”. Five thousand daily infections will be the signal for “when to lift the lockdown”, she said.

And the French seem to be skeptical too, having drawn lessons from the first lockdown, which lasted much longer than initially planned.

Of those responding to the LCI poll, 80 percent – eight out of 10 – said they expected that the lockdown would go on for longer than December 1st.

Many Parisians said they were hoping to flee to country homes or other havens to ride out the lockdown – the national traffic agency reported unusually large traffic jams in the capital Wednesday evening, just before Macron spoke.

Others were resigned to long hours stuck at home.

“So I can forget the little twinge of sorrow when we'll again see all these sad streets, empty, and no more terraces,” he said.