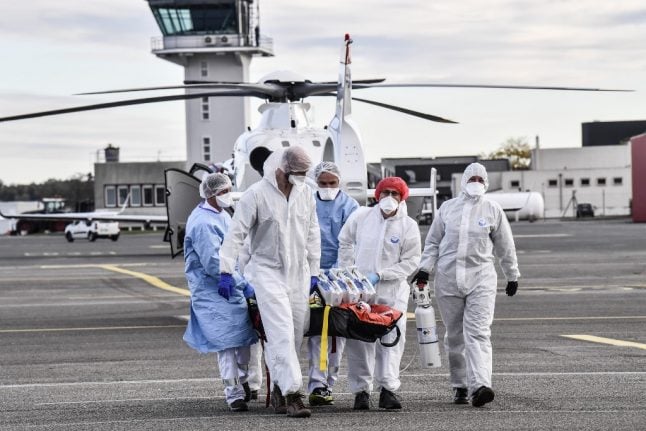 Medical staff carry equipment to a waiting flight at the Bron airport near Lyon, southeastern France, on October 27th, 2020. The equipment was to be shipped to a waiting hospital. Photo: AFP

In the past week, France along with other European countries including Belgium, Croatia, the Czech Republic, Germany and the UK, has reported its highest daily infection rates since the start of the pandemic.

Despite the French government’s efforts to slow down the spread of the virus with targeted measures such as closures and curfews, the rate of infections has continued to rise across the country.

Talk of a second wave, and how to avoid it, has been around since the end of the spring lockdown, but the current situation seems to suggest it was inevitable all along.

The past weeks have seen political leaders officially acknowledging its arrival. “The second wave is here,” said Prime Minister Jean Castex at a press conference on October 22nd.

But while both authorities and health professionals are better prepared this time around, several factors point to that the second wave might be even worse than the first.

“If we don’t do anything, the virus could kill as many people, maybe even more than in March and April,” Epidemiologist Martin Blanchier told Le Parisien.

How is the so-called second wave in France different to the first and is it far worse as some health officials suggest?

The virus is spreading much more broadly

In his speech to the nation on Wednesday night President Emmanuel Macron said the difference between the second and the first wave was that “all regions had reached the alert level”.

During the first wave, the worst hit regions were the Grand Est and Île-de-France, while the west of the country largely managed to avoid a wave of cases.

But by the end of October the epidemic has impacted the whole country. In total, 92 départements out of 101 are highly vulnerable to the spread, according to the latest data from Santé Publique France.

The map below shows the level of spread in 35,014 French communes, dark blue indicating an extremely high level.

While there is no equivalent map over the situation in March, we do know that several départements are in a more serious situation now than during the first wave.

In the southeastern region of Auvergne-Rhône-Alpes, home to Lyon, the number of hospitalised patients on October 25th has come dangerously close to the levels reached in April, at the peak of the pandemic.

In Isère and the Puy-de-Dôme départements, both in Auvergne-Rhône-Alpes, twice as many patients are now hospitalised than during the lockdown in the spring. That was also the case in the Cotentin Peninsula in Normandy.

Other départements that have seen the number of hospitalisations surpassing those seen in the spring, in some cases by a large margin, are Nord, Loire, Savoire, Hautes-Alpes, Haute-Loire, Tarn and Tarn-et-Garonne.

The fact that the virus has reached a high level of spread in such a big part of France could make it difficult for the government to reintroduce a regional transfers of patients between hospitals in different regions as well as diverting medical staff to hard-hit areas.

This week, 16 Covid-19 patients were transferred from Auvergne-Rhône-Alpes to hospitals in other areas, but because of spiralling patient numbers “by next week that will no longer be possible,” Benoît Elleboode, Director General of the south-west Nouvelle-Aquitaine Regional Health Agency, told AFP.

After the critical situation seen during the peak in April, hospitals are now better prepared to deal with an influx of coronavirus patients, both on a medical level and on an organisational level.

“Patients are spread across all the hospitals in the île-de-France region,” Stéphanie Gaudry, an intensive care doctor in Bobigny told actu Seine St-Denis. “That was not at all the case during the first wave.”

During the first wave, hospitals also lacked masks, gloves and other kinds of protective equipment, leaving staff to a huge risk of infection when treating patients. Knowing that the virus would be around for long, France has since then stocked up on masks and made wearing them an everyday feature for all of its population.

Doctors are also generally better prepared to treat patients after the experience of the first wave. Patients in intensive care are receiving improved, less invasive treatments than in spring, when doctors were not yet familiar with the illness.

The average time of a patient in intensive care has been reduced, health chiefs say.

During the first wave intubation was used to provide oxygen to patients having difficulty breathing, but now doctors are using new methods such as non-invasive ventilation, which has increased survival rates and reduced patients' length of stay in hospital.

… but they still lack resources

France has increased its total intensive care capacity from 5,100 to 5,800 beds, but hospitals say that's not enough.

According to Santé Publique France, 2,909 people were hospitalised in intensive care wards on Tuesday October 27th, for a capacity of around 5,800 beds, forcing the government to consider imposing stricter measures, which could involve a second lockdown.

READ ALSO Another lockdown in France? What we can expect from Macron's speech to the nation

At the height of the epidemic in April, more than 7,000 patients were hospitalised in intensive care, a figure that dropped dramatically thanks to the lockdown and continued to decrease until the end of July, when it began to increase progressively again.

The health minister has said they can increase this number to 7,700 within 15 days “without major organisational effort”, however hospitals want to avoid having to dedicate all their resources to Covid-19.

On top of that, nurses and other hospital workers have said they are exhausted, many were on the verge of burnout after having worked around the clock this spring.

Jean Castex promised an extra pay of €110 to €200 per day for doctors and nurses who accepted to give up their Toussaint holidays. But it will be difficult to convince these workers go through the sometimes hellish experience from earlier this year.

Hospitals still catching up with patients from spring

During the first wave hospitals in hotspots had to transform their establishments into all-Covid treatment centres and postpone other treatments, which had grave consequences for those concerned if repeated.

Hospitals are still catching up with operations and cancer treatments that were postponed in the spring, so it will be harder to free up beds this time. They have also explicitly stated that they do not want to let Covid take up all of their resources this time.

“This time around, the challenge will be to treat everyone,” Milleron said.

However hospitals in areas with high level of spread such as the regions surrounding cities like Paris, Marseille or Lyon sounded the alarm weeks ago that they were in danger of being overwhelmed with patients, just like they were in March.

Now, hospitals in other regions are following suit.

“Without taking into account the pandemic, our intensive care services are already almost full,” Ferhat Meziani, head of intensive care at CHU hospital in Strasbourg, told the AFP.

With almost 19,000 hospitalised Covid patients, France has reached levels not seen since the end of March. But the second wave is inevitably progressing very differently to the first.

Thanks to a higher number of tests and the use of masks, the virus has been spreading more slower than March, but steadily, which means this second wave could last longer.

Autumn is more difficult period in general compared to spring due to the increased presence of other viruses such as the regular flu, which puts more pressure on hospitals.

This time, summer is not around the corner, and there is little hope that things will naturally improve better in the coming months as the weather gets colder.

One thing that has improved drastically between this spring and now is the test and tracing system.

Back in March, France had almost no testing capacity at all, and since the end of lockdown the country has increased its weekly testing capacity from some 200,000 tests per week to around 1.6 million now.

Between October 12th and 18th, the period during which the curfew started, France issued 1,635,000 tests, according to the Direction of research, studies and statistical analysis (DREES).

However, health experts say even that number is too little to detect all cases.

According to Jean-François Delfraissy, president of France’s Scientific Council, the official figures only reflect a fraction of real cases.

“We think we might be closer to around 100.000 daily cases, twice as many as those diagnosed,” he told RTL.

Epidemiologist Catherine Hill has called for mass testing because “the number of identified cases probably only represent around a fifth of the total contaminations,” she told Capital.

“On September 30th, the total number of cases would be around 64,000 rather than the 13,000 infections detected,” she said. “The new clusters would only be the tip of the iceberg.”