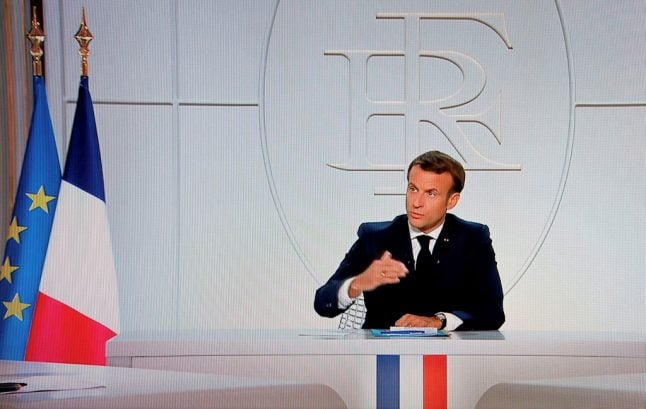 READ MORE: IN DETAIL – What are the rules of France's second lockdown?

“I have decided that we have to, as of Friday, return to confinement,” Macron said, in a live televised speech on Wednesday evening.

“If we did nothing… within a few months we would have at least 400,000 additional deaths,” he said.

Hospitals in France are at breaking point and intensive care units filling up rapidly.

“No matter what we do, nearly 9,000 people will be in intensive care by mid-November,” the president warned.

The Sante Publique France health agency on Wednesday reported 244 new virus deaths over the past 24 hours, and more than 36,000 new positive tests.

The lockdown, which will be in place until at least December 1st, will be less rigid than the one imposed in France during spring, the president said.

“Schools will stay open, work can continue and visits will be allowed to elderly nursing homes,” Macron said.

His speech came less than two weeks after he spoke to the country to announce a curfew would be imposed in the hardest-hit cities such as Paris, Marseille and Lyon.

Last week the curfew was extended to roughly half of the country. But the measure has failed to stop the devastating resurgence of the epidemic.

Macron said he had given a 10-day deadline to see whether the measures were efficient or not and that “we're now at that point.”

“The virus is circulating in France at a speed that even the most pessimistic did not foresee,” he said.

Covid-19 patients now occupied more than half of the country’s hospital beds, the president said, which meant hospitals were beginning to postpone surgeries and treatments to deal with the mounting pressure.

“If we don’t put a brutal brake on the transmissions today, our hospitals will be saturated,” Macron said.

“The second wave will without doubt be more deadly than the first.. nothing is more important than human life,” Macron said. “My responsibility is to protect the French.”

Starting Friday and until December 1st, everyone who could would have to work from home, the president said.

“Like last spring, you will be able to leave your home only for work, for a doctor's visit, to help a relative, do essential shopping or go out shortly for air,” Macron said.

All public gatherings will be banned. Schools will remain open – crèches, primary and secondary schools and high schools – however universities will close and lectures would be given via video links.

The attestation – permission slip – to go outside would be brought back, meaning a return to police checks to see that those out on the street had a valid reason for being outside.

As for travel, the president said travel between regions would be “tolerated” until the end of the weekend, in order to let those currently away on Toussaint half-term holiday return to their homes.

Factories and farms will also be allowed to operate, Macron said, and some public services will function, to limit the economic damage that would come from shutting down the country completely.

More details on the different measures will be announced tomorrow, Thursday, by Prime Minister Jean Castex at 6.30pm.

“Every 15 days, we will look at the evolution of the epidemic. We will decide, if necessary, on additional measures and will then assess whether we can alleviate certain constraints,” he said.

“I hope we'll be able to celebrate Christmas and the New Year with family,” he said.

Macron appealed to the solidarity of the nation, asking that the country “stay united and not give in to division.”

“We have done everything possible and I am convinced that our strategy is the good one,” Macron said.

“This period is difficult but it is a revelation of who we are.. Whether we succeed will depend on the civility of each and one of us.