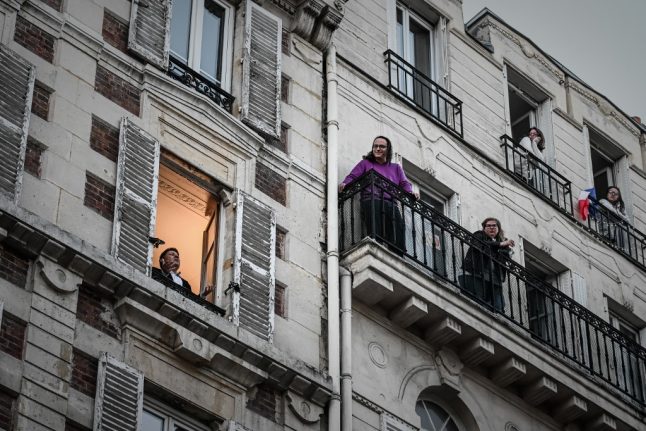 During the lockdown this spring, Parisians without gardens sought refuge on their balconies. Those without balconies.. did not. Photo: AFP

President Emmanuel Macron has decided to opt for a new four-week national lockdown, albeit slightly less strict than in spring.

The thought of once again having to confine at home, which in and around Paris often means being stuck inside small apartments with no escape to bars or restaurants was not appealing to the locals waiting for Macron's announcement.

Most of the people The Local spoke to in Paris on Wednesday said that, while they worry about the consequences of a lockdown, they believed a second confinement was necessary.

Jean-Pierre, 73, is retired and lives alone in the 11th arrondissement. “Of course it will be hard, but I don’t think we have a choice. The pandemic has become almost uncontrollable,” he said.

“I’m not at all ready,” said Hamouda, 43, who was sitting at a café with her sister Fatiha, 28, and her four children. They both live with their families in Champigny-sur-Marne, a suburb to the south-east of Paris, but work at an aesthetician's in the 11th arrondissement.

During the lockdown this spring, as schools closed down completely, Hamouda had to homeschool her children. “I spent my days printing their homework and helping them do it,” she said. “It will be a nightmare if the schools close.”

READ ALSO Another lockdown in France? What we can expect from Macron's speech

Some Parisians, those who are able to, are again planning to leave the city if a new lockdown is announced.

“I’m leaving Paris as soon as possible,” said Gilles 37, the director of a communications agency.

He spent the lockdown in his house in near Bordeaux with his family, and is worried above all about the consequences that a new lockdown can have on business.

“That, along with the anxiety that people are feeling, is what worries me the most,” he said. “The uncertainty is very difficult to deal with.”

Miriam, 61, a painter who lives in the 11th arrondissement, is also planning on going to her house in Brittany with her husband if a new lockdown is announced.

“We’re waiting until the last minute because I don’t like leaving Paris. We stayed here for the lockdown and it was fine for the first month but then I fell into a depression,” she said. “I had insomnia and other health problems, and a general feeling of anxiety.”

The psychological effects of a second lockdown could further weaken people's mental health, according to some health experts. This is particularly true for the younger population, whose job prospects have been shattered.

Bouthaina, 46, a nanny who was taking the twins she looks after for a walk in their pram, was mostly worried about her children’s lack of opportunities.

“I live with my four daughters who are all young students, so it’s very difficult for them because they are really struggling to find a side job or an internship. I am lucky enough to be able to support them, but it’s very hard for them,” she said.

It is still unclear whether the government will be forced to close down its schools, although leaks from government sources to French media suggest they will remain open – even high schools (lycées).

For Catharina, 16, and Justine, 17, who are in their last year of high school, going back to remote lessons further would slow down their learning. “I find lessons much harder to follow, and the lockdown was depressing. I didn’t like it at all, so it’s not good news for me” said Justine.

“I’m worried about the impact [not going to school] will have on our marks to get into university,” said Catharina. “But I guess a lockdown is better than not doing anything.”