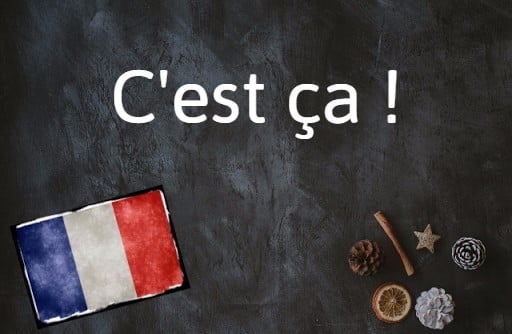 Because it's a common and versatile expression, often used in a way  that your French teacher won't teach you.

Literally, c’est ça translates to ‘that’s it’, in the sense that you got something right.

For example, if you’re asking for confirmation that you have understood something correctly, and the person you're asking answers c’est ça, it means 'exactly' or 'that's right'.

C'est ça here takes the same meaning as voilà, so 'you got it', 'there you go'.

Beware, however, that c'est ça is also widely used to express sarcasm or skepticism, just like you'd use 'right' or 'sure' in English.

If somebody tells you they're a secret member of the British royal family, you could answer, ouais, c’est ça !, your tone dripping of sarcasm.

If your boss tells you that they expect you to answer emails at 3am on Sundays, you could jokingly say c’est ça. (If the boss doesn't take that well and you realise that he or she was serious, you might want to think about finding a different job).

Also, if someone tells a dumb joke and you cannot master to produce a laugh, just say, hehe, c'est ça..

If you’re not sure about the way a French person is using c’est ça while talking to you, it's all in the tone.