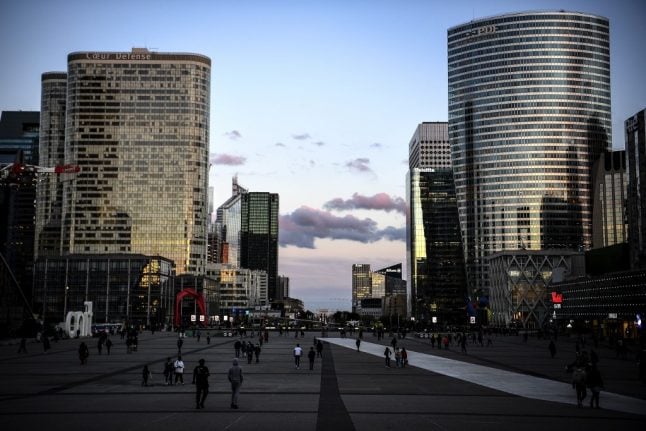 People walk on the esplanade during the evening rush hour at the business district of La Defense west of Paris on October 21st, 2020. Photo: AFP

Normally a hive of activity and teeming with workers, shoppers and tourists, La Defense, on the French capital's western edge, is a shadow of its former self due to changes imposed by the coronavirus pandemic.

On the 18th floor of the imposing Grande Arche building, half of Freelance.com's 1,200 square-metre office space is practically deserted.

A room where 25 staff normally work is vacant and closed off for cleaning after one member tested positive for Covid-19.

“We're playing it by ear,” says managing director Laurent Levy, adding he fears the hit on the company in 2021. People sit on and walk by the stairs leading to the Grande Arche during lunch break at the business district of La Defense. Photo: AFP

On an autumnal day, nearly a year after the virus first emerged, teenagers congregate on the steps of the Grande Arche, where technicians are fixing the lift.

“Outside you'd say that it's back to normal,” Cyril de Thoury, manager at a big bank, says.

Masked workers continue to pour out of the metro and suburban RER trains first thing and, at lunchtime, restaurant terraces are full.

But inside the 59 towers of glass and steel, nothing looks as it did pre-virus.

Since France lifted its national lockdown in May, only 60 percent on average of the 180,000 people employed in the district are present, according to Paris-La Defense, the state body that manages it.

Some 500 companies are based at La Defense, which was built in the 1960s, including banks, head offices of CAC 40 companies and big international firms. People walk by an office building at the business district of La Defense. Photo: AFP

Work and nothing else

With many working at home, social distancing and rules for moving around the office, staff are “no longer ever in the same place at the same time”, Rabah Kidri, team leader at a large bank, says.

The social ties that bring them together are fraying and work is slowed down, he adds.

“To go and see Antoine who sits three chairs behind me I have to go through two rooms,” he remarks.

“If you do it, it's because you really need to… whereas before, you could do it several times a day, even if just to see how things were going or to say 'hi'.”

Over in another tower, at an energy giant's headquarters, Mohamed, an office cleaner at La Defense for 17 years, says the atmosphere has changed.

“Before Covid, the workers used to have a coffee with us, they'd have fun. Now it's work, work and nothing else,” he says, adding that people have also become wary.

For cleaning staff, the virus has increased the workload and pressure.

“We're on the front line. We're not allowed to make mistakes. We forget to put soap in the toilets and the matter goes right to the top,” says Mohamed, who declined to give his full name.

Like his colleagues, he's afraid of catching the virus “but we don't have a choice, we have to work”, he says. A hand sanitizer bottle is displayed on a desk at an empty open-space, which has been closed due to Covid-19 cases. Photo: AFP

Kidri now prefers to avoid the canteen — having to book a seat one week in advance for a half-hour slot makes it less convivial.

Instead, he and some of his asset management colleagues opt for a nearby brasserie where they order burgers using a QR code to avoid touching the menu.

It used to be a favourite haunt for afterwork meet-ups or leaving drinks but those aren't really possible now, especially after the introduction of a 9pm curfew.

French diners are urged to keep masks on when not eating and refrain from groups of more than six.

“It was a very lively area, I used to do big afterwork stuff, with concerts, events, but now all that's over,” says Jose Luque, head of the Histoire De brasserie.

His customer numbers are half what they used to be, he estimates — figuring out staff rotas is a real headache.

“Sometimes you get staff in for nothing and send them home again after an hour. You can't plan ahead for anything,” he says.

Independent businesses who have lost their regulars share that fear.

“It's empty,” says Ophelie, manager of a beauty institute where half the staff are partially unemployed, who says home-working customers have changed their habits and now stick close to their own neighbourhoods.

“Everyone is looking forward to being able to take off their mask — especially me — to breathe a bit and even if only to see somebody else's face,” says Levy.

As France grapples with a second wave of infections, the economic crisis is only likely to worsen.

According to an Insee statistics agency forecast, the French economy is set to shrink nine percent in 2020, with 840,000 jobs lost.

At some businesses, activity has dropped off to the point that workers don't have much to do.

“Managers try to keep people busy by giving them supplementary tasks,” says an employee at a small financial firm, speaking on condition of anonymity. Men have a chat in an open-space of a high-rise building at the business district of La Defense. Photo: AFP

Without the usual workforce and tourists — 8.4 million a year normally visit La Defense — some are struggling.

The chic rooftop La City restaurant has temporarily shut its doors. Chantal Raisseguier, head of a company offering real-estate advice for the hospitality sector, says the pandemic has complicated their business.

“We had contracts we were on the verge of signing and which have either been postponed or cancelled,” she says.

For months now, most of the communication has been via email, video and phone at Freelance.com, which employs about 200 staff and links up large firms with independent ones.

But working at home makes things harder for new staff to learn the ropes and know who's who, says vice president Claude Tempe.

“Body language, human relationships, gossip all make up the way in which people communicate with each other,” he says.

De Thoury, who heads a team of nine at his bank, says he has a new young recruit whom he has never even met. Nevertheless, home office hasn't posed major problems at Freelance.com, where activity and service levels are nearly the same as when everyone was in the office, Tempe says.

For some, the end is nigh for having to come into the office at all. The pandemic has shown that it's possible to work from anywhere in the country, almost as efficiently, says Kidri, in his 30s.

He acknowledges he'd be ready to work elsewhere, possibly for slightly less money, in exchange for a better quality of life.

Renting less office space could be a good way for companies to save money and some large London and Manhattan firms are mulling the option.

At La Defense, four new towers are under construction, two of them more than 200 metres tall.

But Christophe Burckart, managing director for France at IWG, which rents out co-working spaces, doesn't see things going back to how they were.

“The conventional lease, where companies have to commit to rent for six, nine or 12 years, becomes very restrictive for firms,” he says.

Convinced the “office will have to reinvent itself”, Raisseguier already thinks the “extremely vibrant” economic department where she has worked for about 20 years won't ever be quite the same.

“Will the district again be as full as before? Not certain,” she says, as people brace for tougher restrictions.