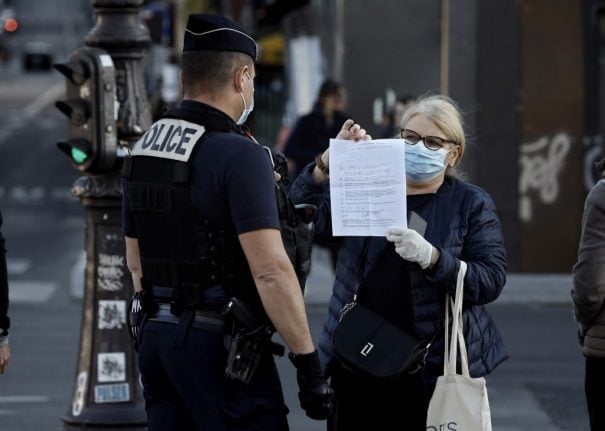 On Thursday the French government added more details to the lockdown rules detailed by Macron. This article has been updated in light of the updated guidelines. We have also produced more detailed articles to cover certain issues.

The confinement will begin on Friday October 30th and last until December 1st, although it may well be extended.
In the spring Macron announced the first lockdown would last two weeks but in the end it was enforced for almost two months to give time for the infection rate to come down and the pressure on hospitals to be eased.
The French public will be hopeful but probably not expectant that the second lockdown will end on December 1st.
Stay-at-home orders
As in March the public in France will have to stay at home from Friday October and will only be allowed to leave for essential reasons. That might be work related, if they cannot work from home or to visit the doctor or to go shopping. But essentially it will be the same as in spring.
Permission forms
The attestations that the public needed to leave their home will become obligatory once again.
The forms listed the essential reasons people could have for leaving home such as “getting some air”, health visits or to buy essential goods such as groceries or to help a vulnerable person.
The forms can be in paper form or on mobile phones and must be filled out correctly and shown to police in the event of a check. Anyone without a valid form faces a fine of €135. The fines may rise for repeat offenders.
Permission forms would also be needed to go to work, as they were in spring. Pupils will also need permission forms issued by their schools.
In a new move permission forms will be also be needed for parents taking their children to school in the morning or picking them up in the afternoon.
The forms will be available via the Ministry of Interior's website or the TousAntiCOvid smartphone app.
For more on the essential reasons you can leave your home CLICK HERE.
Exercise / 'getting fresh air'
Leaving the house to exercise will be allowed but once again it will have to be within 1km of a person's home, according to a BFMTV report. It was not clear whether cycling would be allowed.
Macron referred to being allowed to “get some air”.
Travel
Travelling between different parts of France will be forbidden from Friday. France is in at the end of half term school holidays and the president said there would be tolerance for those people returning from holiday.
Gatherings
All meetings in private are banned as are all public gatherings.
Religious ceremonies and places of worship
“Religious ceremonies will be banned except for burials, limited to 30 people, and for weddings, that are limited to six people,” PM Jean Castex said on Thursday.
Places of worship will however stay open.
Schools
The main difference between the new lockdown and the one imposed in March is that schools in the country will stay open.
There had been speculation that lycées (high schools) would close given the presence of numerous clusters but the president has decided to keep them open.
That will at least be relief to parents, many of whom are having to work from home.
Extracurricular activities, “when providing after-school child care in the evening” will remain open, the PM said on Thursday. “On the other hand, establishments which offer out of school activities – sports or artistic, such as sports clubs – will close.
On Thursday the education minister announced that face masks would be compulsory for all children over the age of six. Previously the rule had only applied to children over the age of 11.
Universities will close however and all lectures will be by video-conferences.
France's PM Jean Castex will give more details on the rules of confinement in a press conference on Thursday evening.

Work from home
Many workers are already based at home but Macron said télétravail as it is called in France will be “generalised” where possible. In other words it should become “the rule” five days a week.
However public services would continue to operate as would factories and farms albeit with strict sanitary rules. AFP
Shops
Non-essential shops will have to close but grocery stores and supermarkets, pharmacies, tabacs, as well as petrol stations and other essential stores will remain open as they did in spring.
There had been hope that all shops would be allowed to stay open but the president and the government decided that non-essential stores such as clothes shops must close. He did however suggest that the decision would be reviewed in two weeks if things improved.
The government confirmed on Thursday morning that food markets, whether open air or indoors would stay open.
Outdoor public areas
Following Macron's speech the government confirmed that in contrast to the lockdown in spring parks, gardens in cities would remain open.
However the government spokesman did not mention whether beaches would be closed to the public as they were in spring.
Bars and restaurants
Bars and restaurants will close across the country. Bars have been closed in most of the country's biggest cities for several weeks but restaurants have remained open.
However they will all be forced to close from Friday.
Restaurants will be allowed to operate a take away service however.
Hotels will be allowed to stay open, but their restaurants will be closed.
Venues closed to public
Any venue frequented by the public that is not essential will close. That means cinemas, theatres, museums and of course other places such as non-essential shops mentioned above.
Post offices and state offices such as job centres would remain open.
Visits to care homes
Unlike in spring people will be allowed to visit relatives in care homes.
Funerals
Funerals will be allowed to take place.
Professional sport
Unlike in spring professional sport, such as the football league will be allowed to carry on, albeit behind closed doors. Small crowds had been allowed in certain parts of the country but they will now be banned.
Transport
Trains, metros, trams and buses as well as taxis would continue to run, although Paris reduced its evening transport as of Wednesday.
Borders
Macron said France's European borders would remain open. External borders with non-EU or Schengen area countries remain closed as they have been since March apart for essential travel.
Anyone arriving in France will however have to be tested for Covid-19.
Existing rules
Some existing rules will still apply such as mandatory face mask rule for when people go to shops or when they venture outside in certain towns and cities such as Paris. France also makes it obligatory to wear masks on public transport.